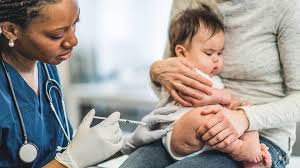 (UNDATED) – One-third of children between the ages of 19-35 months don’t receive vaccines on time, leaving them vulnerable to preventable infectious diseases, and their complications, a new study finds.

The study revealed that 63% of children received vaccines on time before the age of three, as per the Center for Disease Control and Prevention guidelines, while 23% limited the number of shots per visit or skipped at least one vaccine. Another 14% were not compliant with guideline recommendations, according to data used from surveys at Emory University from 15,059 children nationwide showed.

The CDC recommends children be vaccinated against 14 illnesses in their first three years of life:

Between 12 and 23 months of age, your baby should receive vaccines to protect them from the following diseases:

Vaccine delays were more common in children who moved across state lines, were not first-born, lived in the Northeast, were black or multi-race, and below the poverty level, according to the study.

Vaccination has been named an effective public health intervention yet, parents are still choosing to delay or forgo vaccination for their children. Uncertainty about the safety and necessity of vaccines, along with general mistrust of the pharmaceutical industry, has led to this recent trend, the study said.

Officials say there is a general trend in vigilant families to delay or refuse vaccinations due to concerns about preservatives used in vaccines. The study also confirms that misinformation about vaccines in recent years and reservations about giving too many vaccines at one time may be leading to these delays.

Authors of the study highlight a need for interventions to minimize vaccine delays that put children’s health, and public health, at risk.

Officials say often time’s parents don’t have a good understanding of why they are refusing, and seem to want to be a part of the anti-vaccine movement promoted by social media influencers/blogs and concepts that are not backed by reliable data. The pharmaceutical industry needs to be more transparent regarding the ingredients used.

Interventions should target both providers and parents, the authors of the study said.

For more information on vaccination schedules, safety and side effects, refer to the CDC’s website.