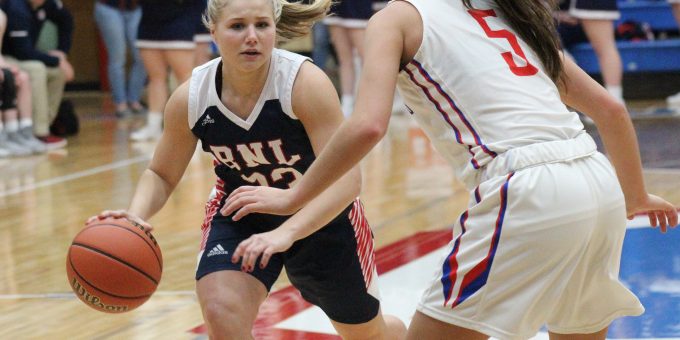 BEDFORD – When Bedford North Lawrence basketball returns for the 2020-21 season, coach Jeff Allen will have more guards than the president.

Everyone will take aim at the Stars, the not so-Secret Service corps who will be defending their share of the Hoosier Hills Conference title and chasing their 10th consecutive Class 4A sectional championship. That comes with the territory.

The difference will be BNL’s mode of attack. After a decade of inside power, the Stars will be guard-heavy with perimeter weapons. BNL loses two starters and three seniors, including all-HHC center and postseason star Madison Webb. What’s left behind is a much smaller roster, dictating a change in style.

“When you became more guard oriented, you play faster, where you’re not looking to emphasize the post as much,” Allen said while gazing into the program’s future. “Not that we won’t run stuff to throw the ball inside, because you need that inside-outside action to be good.

“But we’ll play faster. When you put five guards on the floor, you have to turn up the defensive heat, you have to get baskets in transition. That will be a big part of how our style will look.”

BNL will return scoring leaders Chloe McKnight (14.1) and Irye Gomez (12.5) at the head of the senior class, in addition to sophomore Karsyn Norman (8.1), who got shoved into the spotlight as a raw rookie. She was forced to adjust on the run.

“At first, I was definitely really nervous, and you could tell by the first few games,” Norman said. “But I got close to the girls as the season went on, and they – especially the seniors – really helped me calm my nerves. I got in the groove of things, and it was a lot better.”

BNL will also have veterans on the bench (Haley Deckard, Jenna Louden, Makena Moore and Carlee Kern) to vie for starting spots. Deckard, at 5-foot-10, might be the post by default as the tallest of the returning roster.

“I think it will be really fun,” Gomez said. “We’re going to miss them (departing seniors Webb, Gracie Crulo-Rood and Peyton Sweet) very much. It will give other kids an opportunity to step up, and be there for us. Haley will be a big factor, being one of the only big kids in the paint. It will be exciting.

“We’ll definitely play faster. In the past, we’ve always tried to get the ball down low to Jorie (Allen, the 2019 Miss Basketball) or Madi, and we’ll still try to do that. But it will be a lot of guards out there and make the game fast.”

“Next year will be really different,” Norman said. “We won‘t have a true big, although we’ll have Haley Deckard and she’s good. We’ll have to change.”

BNL will also welcome talent from the junior high feeder program, including incoming freshman Chloe Spreen, who is already being recruited by major college programs. Her reputation precedes her.

”We’ve got lots of good, talented kids coming in the program,” Allen said. “We have quality kids with really good ball skills. I think people overlook how important ball skills are. It’s still about putting the ball in the basket, being able to dribble and pass. We’ve got some kids that are pretty skilled.

“I thought my bench kids were outstanding this year, so we’re going to have depth. I’m excited. I’m sad about this year being over, because we would have liked to have played one more week.. But I’m excited about next year. We have a lot of great pieces back.”

Leadership will be key. Norman appreciated the support from Webb and Crulo-Rood as she navigated the early stages of her freshman year. Next season, with six seniors likely, BNL will be a veteran group.

“We can take more initiative on the floor, be the calm teammate to keep everyone on the ball,” Gomez said. “Make sure we’re doing what we’re supposed to.”

Big or small, the goals remain this same. BNL points toward championships.

“That’s always going to be our goal,” Allen said. “We can talk about higher goals, but the goal initially is going for the conference and sectional championship every year. We’ll lay the groundwork for that early.”

“I was really nervous about the sectional, keeping that streak going,” Norman said. “Then the regional was really cool. I hope to be back again.”