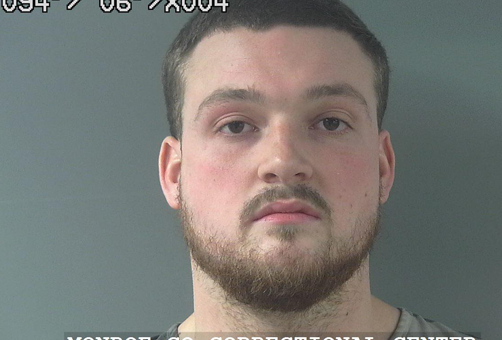 (BLOOMINGTON) – Indiana University football player Peyton Hendershot was arrested Saturday night by Bloomington Police after a fight with a woman.

Bloomington Police were called to Brandon Court at 11:12 p.m. Saturday after a 22-year-old woman reported Hendershot had taken her cell phone and assaulted her.

The woman was in a relationship with 20-year-old Hendershot who played tight end for IU.

When police arrived, the woman told the police Hendershot had offered to do her laundry when he brought it back she was asleep so he left it the basket on her front porch.

When she woke the two exchanged text messages, and Hendershot accused her of infidelity and became angry. He then returned to the woman’s home and walked into her bedroom uninvited.

The woman told police Hendershot grabbed the woman’s cell phone and began looking at her messages. She told officers when she tried to get her phone back, Hendershot grabbed her by her neck and shoved her against a wall in the kitchen.

He then left but not before throwing her cell phone at her and breaking the screen on the phone.

Police say the woman had visible red marks on her neck.