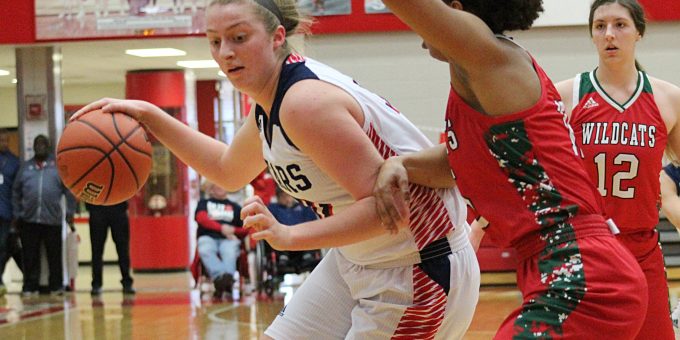 JEFFERSONVILLE – The end was a plot twist, an unexpected development from a basketball team that ranked among the top scoring units in the state, thanks to execution and selection. That was taken away, and Bedford North Lawrence fell hard without that safety net.

Lawrence North, spreading its defensive tentacles to the distant regions, rewrote the closing scene, conquering the Stars in the Class 4A semistate on Saturday afternoon, denying BNL an Oscar-worthy run to the state championship game.

Katie Davidson scored 20 points as the No.8 Wildcats (25-4) clawed past the Stars 53-43, winning their second straight semistate crown. They will face No.1 Northwestern (29-0) in the final at Bankers Life Fieldhouse, while the Stars (21-6) exited one win shy of another banner season, tumbling out of the Final 4 for the second time in three years.

Lawrence North earned this one on the defensive end, forcing the Stars to miss 13 straight shots during the first half, pushing BNL into a dismal 3-of-17 performance from long range. Madison Webb was a BNL hero in her final game, scoring 14 points and grabbing 11 rebounds, but the Wildcats were willing to sacrifice the paint to own the perimeter. That won them a trophy.

“I don’t think we shot the ball well,” BNL coach Jeff Allen said. “Their defense had a lot to do with that.

“I could feel the kids pressing. They felt they were struggling. It’s tough at this level when you don’t make shots. And the kids know that. They’re intelligent basketball players. It’s not a good thing at this level.”

It definitely was not good, not at all. After an emotional start, popping to a quick 5-0 lead, the Stars didn’t score again until a Webb layup at the 5:48 mark of the second quarter. They were in chase mode from that moment, and they never caught up.

BNL had a chance, scrambling within 36-33 in the fourth quarter. But a turnover led to a transition trey by Davidson, a rushed shot led to a fake-and-fire wing 3-pointer by Kayln Ervin, and that double-digit gap was fatal.

“We’ve been coming up with big shots at the most opportunistic times, certainly in this tournament,” LN coach Chris Giffin said. “It doesn’t matter who it is, it just matters if it’s Lawrence North. There were girls making big shots.”

Huge shots. Aniyjha Graves, who probably wasn’t noteworthy in the scouting report, banged home two treys in the second quarter as the Wildcats ripped to an 18-9 lead. Davidson started the third quarter with a wing trey and a fast-break layup for LN’s biggest lead at 26-14. BNL couldn’t hit enough shots to streak back.

The Stars made one charge as Webb ended the third quarter with a bucket, Irye Gomez started the fourth with a lane drive, and Webb cashed two free throws with 5:45 left. The LN edge was a single possession. That changed quickly with the two key shots from Davidson and Ervin.

The Wildcats were deadly from long range (8 of 13), which is tough when cat-quick athletes can attack the rim as well.

“We knew it would be a problem if they shot the 3-ball well,” Allen said. “And they did. And we struggled. For us not to counter and make shots we typically make, that’s a bad scenario at this level.

“That’s who is going to win theses games, when you make plays. They made shots from the perimeter.”

Davidson was efficient, getting her points without flash. Kristian Young added 12 for the Wildcats, who paid back BNL for the 2014 semistate triumph in the last battle between the two sterling programs.

“Davidson was really good,” Allen said. “She made some really nice plays when they needed them.”

“We have a lot of veterans, and they carried us,” Giffin said. “We knew coming down here would be really difficult. Bedford is an unbelievable team and they have some good horses. We knew it would be a tough game.

“We were able to execute what we wanted to do defensively. For the most part, our defense was really good.”

Webb found holes in that extended zone. Giffin gambled on that, expected that. His key was Chloe McKnight, BNL’s leading scorer and main exterior threat. She made only one shot.

“That was certainly a focus,” Giffin said. “We didn’t feel like we could completely eliminate Webb. Not to say we could eliminate the shooters, but we needed to focus on them. The strength of our team is perimeter based. We knew Webb would get the ball and get some points, but if we really focused on No.11, it would be to our advantage.”

Karsyn Norman had 12 points, including 9 in desperation mode during the fourth quarter, and Gomez totaled 11. Webb had her 13th straight postseason double-figure scoring game and her third double-double of this tournament run.

“I would have said if she had done that, we would have won,” Allen said. “But the other kids didn’t make shots like they normally do. You have to have that. It’s disappointing, but hats off to them. Their defense was tough.”

Northwestern reached the state final with a 56-46 win over Penn in the northern semistate.