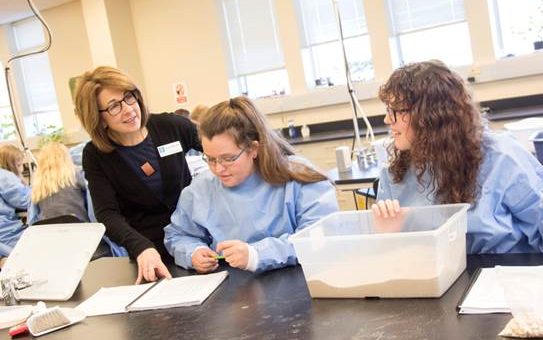 Galbreath’s student nominations highlighted her ability to inspire a general interest in biology and her willingness to go above and beyond in order to advance student learning outcomes. “I have taken biology classes before and I was not interested at all until I took Jeannie’s class,” one student wrote in a nomination. “I now consider biology to be something fascinating!”

Other nominations spoke to Galbreath’s personality and dedication to students, that she is a “great teacher and a very great person who makes sure her students are successful.”

The Adjunct Faculty Award for Excellence in Instruction is given annually to one adjunct faculty member from each Ivy Tech campus statewide. As a recipient of this award, Galbreath is also the nominee for the statewide Ivy Tech Gerald. I. Lamkin Award for Excellence in Instruction. The Award is named for a former Ivy Tech president and recognizes an adjunct faculty member who exhibits excellence in instruction and represents the mission of the college.

Classes start again on March 16 at Ivy Tech and it’s not too late to apply for free and sign up. Visit ivytech.edu/bloomington to explore degree offerings and apply now.