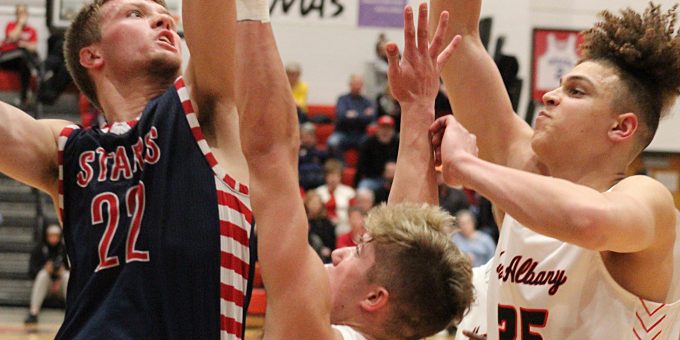 NEW ALBANY – A shot, that’s all Bedford North Lawrence wanted. Just a shot at a victory, for the Hoosier Hills Conference championship, on the road against an opponent that has been untouchable the last decade.

The Stars, trailing all night long, got that shot. Two in fact, one for the lead and one to potentially force overtime. Guess BNL should have asked for a make, too. That did not happen. The storybook ending to a remarkable run toward the league title was rewritten.

New Albany, in the unusual role of spoiler, ended BNL’s seven-game winning streak and probably cost the Stars a share of the conference title with a 44-41 victory on Friday night. Kaden Stanton scored 21 points as the Bulldogs (13-8, 5-2 in the league) conquered BNL for the 11th straight time in the series.

This one hurt more than most. BNL (14-9, 5-2) was seeking its first HHC crown since 2011. Even a piece would have been enough. Now the Stars must wish for a Madison upset of Jeffersonville on Tuesday, which would create an unprecedented four-way pileup at the top.

The Stars would have rather controlled their own destiny, and they did after battling back from a 10-point deficit in the second half. Down 42-41 during the closing drama, Brayton Bailey twisted free for a fading shot in the lane that rolled off with 30 seconds left. Down 44-41, Ben Cosner popped free off an inbound set for 3-pointer that rimmed off.

“We had a shot in the air to take the lead, and it just didn’t go,” BNL coach Jeff Hein said. “That’s the way the ball bounces. It was a good shot. And we had some opportunities at the end. It hurts, but it’s not the end of the world.”

The world still spins because the sectional looms, and BNL would rather trade that title for the conference jewels any time. But this one would have been nice, to crush that New Albany dominance, to claim part of the league championship.

The Stars certainly were valiant. They trailed 42-35 with 3:09 left and made a charge, with Kooper Staley’s wing trey, with Cosner’s corner bomb, with a Colten Leach steal that gave BNL a possession to steal one and ruin New Albany’s Senior Night festivities.

Almost. But close doesn’t win anything. This wasn’t hand grenades, this was basketball.

Bailey finished with 19 points, including 10 in the third quarter while erasing most of the 33-23 deficit during that frame. He swished a 15-footer, grabbed a rebound and roared to the other end for a bucket, and scored off an inbound set to cause New Albany coach Jim Shannon more headaches than a tax audit.

“He was killing us, just time after time. Killing us,” Shannon said. “Great player. One of my favorites.

“I’d still rather have someone beat us than him, because he will beat you. He’ll do it with two or three people hanging on him. He’s just that good. Bailey draws so much attention, he makes it hard.”

Having seen enough of Bailey in his four-wheel drive mode, Shannon went deep in the coach playbook and called for a match-up zone. Bailey didn’t score again, although it did develop openings for others. Shannon would live with that.

“They’re good, they’re not great,” he said of BNL’s second options. “He‘s great. You don’t want the great guy to beat you. Once he gets going, forget it. You’re not going to stop him.”

New Albany did slow him at first, taking away driving lanes and forcing awkward passes. As Bailey struggled for his footing, the Bulldogs jumped in front as Stanton drilled two treys for a 16-9 lead. The Stars spent every minute in pursuit and never quite caught up.

Another key was two corner 3-pointers by sophomore guard Maddox Schmelz, who was hitting only 23-percent from that range this season and was left alone by design. His two jumpers in the third quarter got New Albany that brief double-digit lead.

“At halftime we said ‘Look, you have to start firing it up there,’” Shannon said. “He‘s not the first option, we’re not going to throw it to him and just chuck it, but if he’s wide open he has to let it fly.”

“That’s the poison we had to pick,” Hein said. “And he hit a couple. You have to give him credit.”

Credit goes to Tucker Biven, a University of Louisville baseball recruit who scored 10 points. Also to Staley, who hit two from deep and scored 10. BNL would just like another shot. Sorry, only one chance, and it slipped away.

“We came down here, played them on their home floor, and had a chance,” Hein said. “And I don’t think we played our A game. They’re a very good defensive team. They always are.”

BNL will close the regular season with the last leg of its three-game road swing, visiting Corydon on Feb. 28.