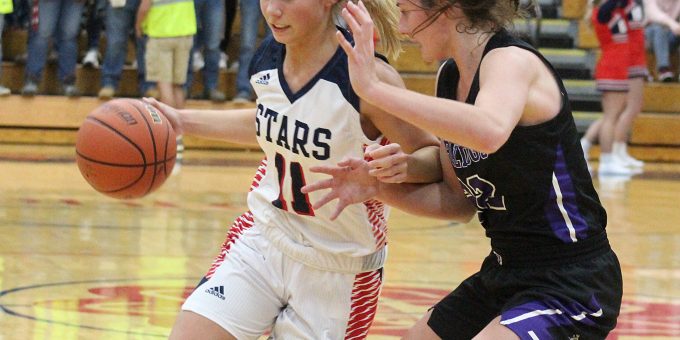 BEDFORD – Few basketball programs in this basketball-crazed state can match the tradition of excellence, the collection of championships, the roll call of legends at Bedford North Lawrence. It’s a legacy that’s difficult to match.

All that history is heavy. Yet here, once again, are the Stars, poised to add to the heritage, to etch a special place among their famous predecessors. With one more victory, BNL will add a banner in the crowded northeast corner of BNL Fieldhouse, where the immortal hang out.

BNL will seek its seventh semistate title in school history on Saturday afternoon, clashing with No.8 Lawrence North, the defending semistate champion, in the Class 4A battle of titans at Jeffersonville. The winner will advance to the state championship at Bankers Life Fieldhouse on Feb. 29.

The Stars (21-5) and Wildcats (24-4) have a history – brief, contentious and fiery. The last mega-collision between them came in the 2014 semistate at BNL, with the Stars taking an overtime triumph en route to their second straight state title. This rematch – Fate has a wicked sense of humor and a long memory – promises to be another high-intensity conflict with so much at stake.

While the names and faces have obviously changed in six years, much remains the same. Lawrence North is blessed with talent, with four starters headed to Division I programs across the Midwest. The Wildcats have an outstanding coach (Chris Giffin has won 172 games in 8 season) and a burning desire to get back to the ultimate stage.

The Stars don’t have the individual assembly of talent like BNL teams in the recent past, with multiple Indiana All-Stars. but they have become a cohesive, bonded unit, better than the sum of the parts, capable of greatness that exceeds the early expectations. They have peaked at the perfect time for this deep postseason run.

“The kids are playing with a lot of confidence and having fun right now,” BNL coach Jeff Allen said. “That’s great to see at this time of year.

“I don’t think my kids feel like they’re in foreign territory. They feel comfortable, but there will be nerves, no matter how good you are or how many times you’ve been there. I think we’ll be relaxed and ready to play.”

BNL played in the 2018 semistate at Jasper, with Madison Webb, Chloe McKnight and Gracie Crulo-Rood playing pivotal roles. Lawrence North won this game last year, topping Castle by 10 points, and the Wildcats have most of those key people back for a return engagement.

Experience is one of the reasons Lawrence North will wear the favorite label.

“I think it’s a big factor,” Giffin said. “None of the games we’ve played thus far in the tournament have been lopsided. They’ve all been close, a couple extremely close, and we’ve been able to draw on that experience. And you need a little luck here and there to win anything.

“We’re very senior dominated, with a lot of experience from what we were fortunate to do last year. They knew it was their last go-around, and they locked in.”

Lawrence North is led in scoring by junior guard Jayla Smith (13.2), who had received several college offers. But the central figures will be senior Katie Davidson (10.3 and signed with Miami of Ohio) and senior guard Kristian Young (10.7 and on her way to Illinois-Chicago).

“Davidson is s tough match-up, like (Josie) Trabel (from East Central) with her size and ball skills,” Allen said. “We have to make sure we pay her some attention. Young is a handful when she gets penetration and goes downhill. We’ll have to defend by committee.”

Defense has been BNL’s staple during the postseason. The Stars have allowed only 34.6 points per game during the six-game surge to this stage. Lawrence North will test that.

“They have some skilled basketball players,” Allen said. “They’re a handful for us. We’ll have to be really sharp defensively, take care of the ball against any type of pressure they throw at us. I’d like to think we’re better at that now, that we’ve improved. We’re going to find out.”

The Wildcats also have concerns with BNL, starting with Webb’s post ability at both ends. Webb is averaging 12.9 points and 6.1 rebounds, while Chloe McKnight (14.5 points, with 71 3-pointers this season) and Irye Gomez (12.6) also pose threats.

“We’re perimeter oriented. That’s not a secret,” Giffin said. “We rely a lot on our guard play. Much of our scoring is right at the bucket, based on penetration, or the 3-point line.

“We don’t have a Webb like Bedford does, a real major threat in the paint. She is really good. She’s big, but she’s able to move and put the ball on the floor, navigate in the paint area, and she’s a really good passer. She’s tough to stop.

“McKnight can shoot it from 50 feet it seems. We can’t allow her to get much space to shoot. She’s just a dead-eye. She reminds me, in terms of the range and accuracy, of (Brittani) Rizzi. They’re all impressive. They’ve gotten a lot better as a group, and it’s been impressive to watch. I wish we didn’t have to play them. They’re very solid.”

Lawrence North started the season 19-0, winning the Marion County Tournament during the run, before hitting a wall and losing four of five. The Wildcats rebounded with impressive postseason wins over North Central (61-58 in the sectional final) and Brownsburg (58-57 in the regional final, rallying from a 42-33 deficit in the fourth quarter with a 15-0 burst).

BNL’s hardest tests was the regional title triumph over East Central (54-48). The Stars have lost only once (to 3A No.2 Salem, which will also be at Jeffersonville for the 3A semistate, facing Brownstown at 1 p.m.) since Dec. 14, putting a 3-3 start to the season in the distance.

“We’ve played a tough schedule, we’ve been in positions where it hasn’t gone our way, and we’ve had to fight out of it,” Allen said. “They’re aggressive and athletic. We’ll find ourselves in position where we’ll have to fight pretty hard again.”

The winner will face either No.1 Northwestern (28-0) or No.6 Penn (27-2), who will battle in the northern semistate at Laporte, in the state championship.

Last meeting: The Stars conquered the Wildcats 62-54 in overtime in the 2014 semistate at BNL. Alexa Bailey had 23 points for BNL, while Destiny Washington totaled 17 for Lawrence North.

Game notes: The Stars leads the series 2-1. BNL has won six semistate titles in program history, the last in 2014. Lawrence North won its first semistate crown last season. The winner will face either No.1 Northwestern (28-0) or No.6 Penn (27-2) in the state championship on Feb. 29 in Bankers Life Fieldhouse.