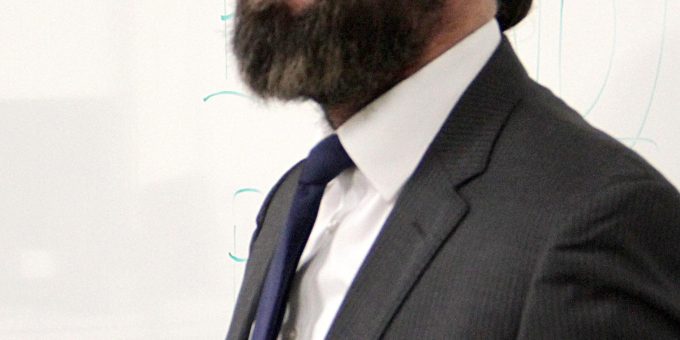 (BLOOMINGTON) – Ivy Tech Community College’s Bloomington campus has named assistant professor of philosophy, Joshua Farrington, the recipient of the 2019 President’s Award for Excellence in Instruction. He was selected among 52 other full-time faculty nominees.

Farrington’s student nominations highlighted his ability to make genuine connections with students in a relatable and engaging way, which encourages class participation and sparks interest in the humanities.

“In all of Josh’s instructional award nominations, it was clear that he is interactive with his students, flexible in his teaching style, and is a favorite professor at Ivy Tech Bloomington,” said Christine Brandel, chair of the award selection committee and associate professor of English. “The number of nomination comments Josh received from students dramatically exceeded other nominees. The positive impact he has on his students is impressive.”

An academic advisor at Ivy Tech Bloomington says that numerous students request Farrington’s classes and that his teaching style makes him very popular. “I have not received even one complaint about him,” as noted in the nomination. “I must be difficult to be an instructor and please the many different personalities that students bring, but Josh is able to do this.”

Farrington began his own education at Ivy Tech, taking classes after high school graduation. He was unsure of his path we he began but says Ivy Tech changed his life. He completed all of his general education courses at the community college and then went on to earn his Bachelor of Arts in philosophy and political science from Indiana University in 2006. He earned his Master’s degree in philosophy with a graduate certificate in clinical bioethics from Indiana University in 2012.

He decided to give back to the community college that helped him find his “vocational calling in life.” In 2012, he began teaching philosophy courses as an adjunct instructor at Ivy Tech’s campuses in Warsaw, Columbus, and Marion, where he was nominated for his first teaching award, for excellence in adjunct instruction at Ivy Tech Warsaw. He was also recipient of three other teaching awards at the Phi Theta Kappa Faculty Awards Ceremony, including “The Bunsen Burner Award,” “Running with the Bulls Award,” and “The Most Wanted Professor Award.”

In 2016, he accepted a full-time instructor position at Ivy Tech East Central where he taught philosophy at Ivy Tech campuses in Marion, Muncie, and Anderson. In 2018, he continued teaching at the Marion campus while also holding positions as Associate Accelerated Program (ASAP) coordinator and program chair of the School of Public and Social Services. In 2019, he won Ivy Tech’s “Statewide Faculty Advisor of the Year Award” and joined the Bloomington campus, where he teaches today.

Farrington’s specialization is teaching Plato’s “Republic” and Aristotle’s “Nicomachean Ethics.” He co-authored an article titled “The Pursuit of Happiness: A Philosophical approach to Treatment Beyond an Eating Disorder.” He has delivered multiple talks on Plato, Aristotle, Academic Excellence, Ethics in Leadership, and Student Retention.

The President’s Award is given annually to one full-time faculty member from each Ivy Tech campus statewide. As recipient of this award, Farrington is also the nominee for the statewide Ivy Tech Founder’s Award for Excellence in Instruction, to be presented by the College in June. The Founder’s Award is presented to one full-time faculty member statewide who best typifies the teaching and learning mission of the College.

Classes start again on March 16 at Ivy Tech and it’s not too late to apply for free and sign up. Visit ivytech.edu/bloomington to explore academic programs and to apply now.