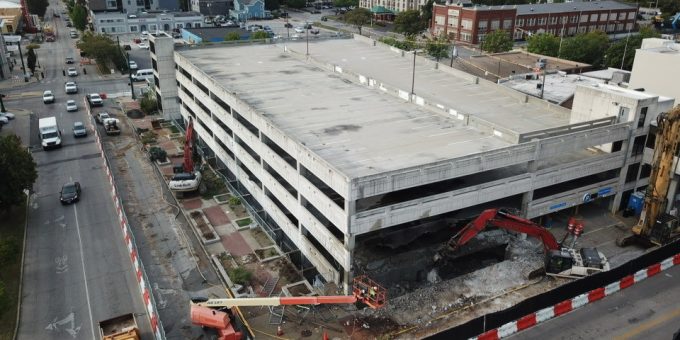 (BLOOMINGTON) – The City of Bloomington will present an updated design for the Fourth Street Garage to the Plan Commission Monday, March 9.

The proposed design, revised by CSO Architects to occupy property currently owned by the City, will add capacity for at least 500 vehicles, 150 more than could be accommodated by the previous, now-demolished garage.

Additionally, the new structure will include potential public or commercial space on the ground floor, public restrooms, public art components, a parking manager’s office, and a variety of features that will allow the structure to receive Parksmart certification for sustainability, including bicycle lockers, a solar array, and electric vehicle charging stations.

The architect’s preliminary drawings will be posted to the City’s website later this week.

Pending approval by the Plan Commission, the process of bidding the job out to prospective builders will ensue.  Once construction begins, completion of the project is expected to take 12 months.

The City pursued a new design for the parking structure after the city’s petition to acquire property adjacent to the current site by eminent domain was denied by the Monroe County Circuit Court.  The City has preserved its right to appeal the Judge’s decision.  The new design anticipates the possibility of expansion should the City later have access to an enlarged footprint.

“We were disappointed that the judge limited the City’s ability to build this public amenity in the most sustainable and efficient way possible, and we know the delay has been difficult,” said Mayor John Hamilton.  “But we are dedicated to proceeding with a project that is so integral to economic vitality in our downtown.”

In late 2018, the original Fourth Street Garage (built in 1985) was determined to be structurally unsound and unsafe for use.  The garage was closed to parkers on January 1, 2019, and demolished in the fall of 2019. A complete timeline of events related to the garage project and answers to frequently asked questions is available here.