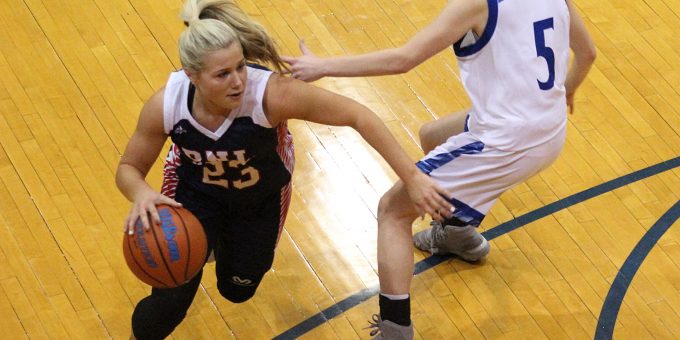 BEDFORD – The spark, the enthusiasm, the zeal wasn’t there, and that was Jenna Louden’s job. Come off the bench, with that blonde hair on fire, with burning desire, and energize Bedford North Lawrence with a jolt of personality and passion.

One problem: that was not the role she had envisioned. Like everyone else who wears a uniform and laces the shoes, she wanted to start. Call it a status symbol. BNL coach Jeff Allen had other plans for the dynamic 5-5 junior guard. He visualized a three-guard rotation, with Louden in the third spot.

Hey, nobody wants to be the third wheel.

But then, after some discussions with her parents, after some encouragement from the coaching staff, after getting virtually the same minutes on the court as any of the starters, Louden had a flash of realization, a moment of enlightenment. She could do this, and she could do it well.

Rather than reject, she embraced the position. BNL (21-5) would not be playing for a Class 4A semistate championship without her.

The Stars will collide with No.8 Lawrence North in the one-game clash of titans on Saturday afternoon at Jeffersonville. When Allen senses the time is right, whether it’s to rest senior Gracie Crulo-Rood, relieve freshman Karsyn Norman, or change the energy level of the game, he will point to Louden, who will make an immediate impact.

Sixth men (or in this case, sixth players) are important enough to have an award named after them. It’s a special talent.

“When you bring that kid off the bench, you want instant energy,” Allen said. “And she has definitely done that. She’s done a great job of coming in and providing spark for us, both offensively and defensively.

“It’s a tough position for her, being the first kid off the bench. In any other program, she’d be a starter and put up big numbers. And that’s a hard thing for my bench kids, and I understand that. You can only play five kids at a time.

“I asked her to accept that role, and she struggled with it early. Kids like to be on the floor. But she’s done a remarkable job of embracing that role, bringing the energy off the bench – which is what you want.”

Louden has averaged 15 minutes per game (and 2.8 points), and that time is crucial. She is usually assigned to stop the opponent’s best perimeter player. She takes over the point guard spot with the offense. That’s a lot of responsibility. That’s why the role is so critical. That’s what she finally realized.

“At first, it did bother me,” Louden said. “But then I got used to it. Then I thought ‘Well, I’m still getting minutes, still playing,’ Starting doesn’t matter that much, even though people think it does. I talked with my parents about it. They told me it doesn’t matter, you’re still playing. It took me a couple of games.”

Allen will interchange his three guards quite frequently, depending on which one is playing well, which one has the skill set for the moment, which one can do the job on the defensive end. Louden is usually the one to shift the gears.

“Pushing the pace, with the ball in her hands, going up the floor is what I like,” Allen said. “She’s really aggressive defensively, and those two things have really helped us.”

Now here’s a quick trivia question: who among the Stars with the most minutes has the best shooting percentage? The answer will surprise. The answer is Louden, who is often left alone on the perimeter. Yet she’s made 50 percent of her shots this season, and that number is 67 percent over the last seven games. She’s selective, but much more accurate than a year ago, when a jump shot was as likely to miss wide left as it was to find the net.

Her shot needed work. As a junior high kid, she could get to the rim for layups. On the varsity level, that’s not always the case. And when opposing coaches ordered her left alone, she noticed.

“It wasn’t good as first,” Louden said. “I definitely had to step it up. I was used to getting in there and getting layups, or I had Chloe (McKnight) and Irye (Gomez) as my shooters. I didn’t think about I should start developing my shot. But I needed that if I wanted to continue playing.”

Hours in the gym, shooting with Dad, fixed a lot of that. She’s 4 of 6 from long range this year – again, not quantity, but certainly quality.

“I feel more confident,” Louden said. “My coaches have talked to me, encouraged me, telling me I can do it. And I’m like ‘OK, I can do it. I’m fine.’ Then I just go play and don’t even think about it.”

Allen doesn’t think about it any more either. He doesn’t hesitate to point at Louden and others on the BNL bench (Haley Deckard, Makena Moore, Carlee Kern) for contributions in key moments.

“All those kids, when I’ve called on them, especially over the last month, have done a phenomenal job,” Allen said. “You have to have that to play at a high level.”

BNL is playing at the highest level, the Final 4 in Class 4A, seeking a return trip to the state finals at Bankers Life Fieldhouse on Feb. 29.