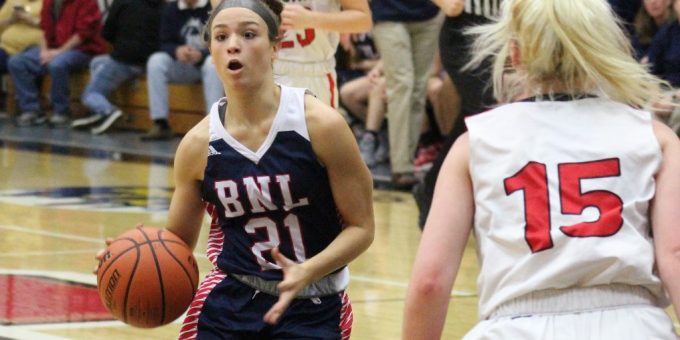 COLUMBUS – Every basketball coach wants their team to improve, to peak at the perfect moment. East Central and Bedford North Lawrence will find out which has done that the most, with an invitation to the Class 4A Final 4 at stake.

The streaking Trojans, winners of 11 consecutive games, will seek the first regional championship in program history on Saturday night, facing a rematch with the tradition-rich Stars (20-5) in the championship game at Columbus North.

East Central has not lost since a home setback to BNL on Jan. 4. The Stars zipped to a 60-55 victory that day, beating the Trojans for the fourth straight time in the short series. So can East Central avenge that loss, finally topple a nemesis, and make history? Or will BNL roll on to another coronation?

That game gave some clues about the rematch.

First, BNL was brilliant early, rocketing to a 21-12 lead after eight minutes. Second, the Stars went stone cold, missing 8 straight shots at one point and failing to score for the first 5:21 of the second quarter. Third, freshman guard Karsyn Norman got hot, hitting four 3-pointers in the third quarter. Finally, Irye Gomez (a layup off a beautiful Madison Webb pass) and Chloe McKnight (a steal and breakout basket) added the finishing touches to BNL’s win.

Norman totaled a career-high 17 points, McKnight and Gomez totaled 15 each, and Webb added 10. East Central hit only 19 of 44 shots, but seven of those were treys. Those are the battle lines.

“After watching the film, we missed a lot of shots around the rim that we typically finish,” East Central coach Kevin Moore said. “It had a lot to do with Bedford’s defense, forcing us a little farther away than what we normally get.

“They live off offensive rebounds. We have to rebound. You can’t give a team like that, that doesn’t hurt themselves with turnovers, you can’t give them easy ones.”

Nothing about this will be easy. East Central freshman Josie Trabel had 20 points in the first encounter, and she was a regional semifinal star during the comeback win over Franklin Central. Charsan McCory stepped out to hit 3 treys against BNL, and Hope Fox added 12 points.

“They cause us some problems from the standpoint of their size and the inside-out game they play,” BNL coach Jeff Allen said. “For us, we cause them some problems because we’re a little better on the wings with some speed and some shooters.

“It’s going to be a really good basketball game. We have to rebound, but that’s always the case for us because we’re not real big. We can’t let Trabel and the big girl (McCory) have their way down low. But they have to guard us, too.

“It’s going to be an interesting matchup, one of those games that’s low scoring because it’s two teams that are very disciplined, trying to get exactly what they want.”

What they want is that coveted piece of hardware and a shot at the next level. The victor will meet the champion from the Decatur Central regional in the Final 4.

The winners will collide in the one-game semistate, at either Jeffersonville or Jasper, on Feb. 22. The IHSAA will announce the site assignments on Sunday.

Last meeting: On Jan. 4 at East Central, the Stars prevailed 60-55. Karsyn Norman had 17 points while Irye Gomez and Chloe McKnight totaled 15 each for BNL. Josie Trabel had 20 points and Hope Fox added 12 for the Trojans.

Game notes: BNL is chasing its 13th regional title, while East Central has never won at this level. The winner will face either Lawrence North or Brownsburg in the one-game semistate on Feb. 22.