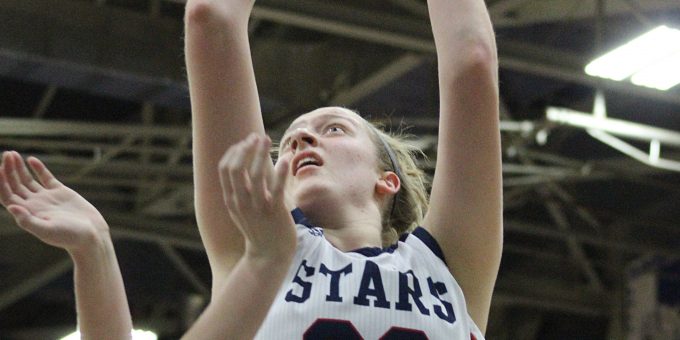 COLUMBUS – Champions, born from the fire, tested by fierce adversity, rise to the occasion. Bedford North Lawrence earned that title, battling past a worthy opponent to don another crown.

Pushed to their limit, forced to maximum intensity and effort, the Stars rallied from an early deficit, absorbed East Central’s best swings and blows, and fought through for a title that will rank among the classics in program history.

Chloe McKnight and Madison Webb were the scoring heroes, Gracie Crulo-Rood was the defensive savior as No.15 BNL finally subdued the valiant Trojans 54-48 in the Class 4A regional final on Saturday night. The Stars won the 13th regional in school history and advanced to the Final 4, barely able to withstand the East Central grit and glory of freshman Josie Trabel.

After shaking off the shock of East Central’s quick 13-point blitz to the lead, BNL had to claw back, inch by inch, basket by basket, possession by possession. They caught up, stared down the demon, and went on a brilliant 8-0 spurt late in the final frame to pull away from the gutsiest of foes.

Trailing 46-44 after Hope Fox buried a wing trey off an inbound set, BNL clinched its fist for the knockout response. McKnight drained a bomb, Crulo-Rood – dared to fire – swished another. And Webb turned a steal into a lumbering, slow-motion breakaway layup for a 52-46 advantage that would prove to be enough.

Before the final seconds even ticked away, reality of the moment set in. The Stars started to celebrate, while East Central’s Brilan McCory broke down in tears, unable to move past halfcourt, as the Trojans came up short in their bid for their first regional ever.

“We just wanted it a lot more,” McKnight said. “We just matched their intensity.”

BNL could not give more, could not play better under the circumstances and stress. The Stars hit 6 of 7 shots in the third quarter, ending it with a 40-38 lead. They didn’t have a turnover in the fourth. High-level, championship stuff.

“We put all our hearts and guts out there and it paid off,” junior forward Irye Gomez said.

East Central (23-6 with the end of its 11-game winning streak) was brilliant. Trabel was unstoppable early, hitting 7 consecutive shots. The Stars tried everyone her size to guard her, and nothing worked. So Allen asked the smallest to take on the 6-0 kid who was tearing BNL apart with 15 first-half points.

“The staff suggested Gracie,” Allen said. “I looked at her and asked ‘Can you do it?’ She said ‘I got her.’”

“I knew we had to stop her,” Crulo-Rood said. “She was lighting us up. I had to do something or we were going to lose the game.” Yes, it was that evident and dire.

With Trabel slowed to a trickle, in comparison to her first-half tidal wave, BNL went to work. McKnight made a baseline cut for a layup, Gomez slithered through for another, and Karsyn Norman scored twice during the third-quarter close. East Central answered, with treys by McCory and Fox, which set up a great finish.

McKnight, who claimed she couldn’t see when poked in the eye just before the flurry, must have been exaggerating. Or else she would not have gone perfect from that point (a driving layup, that clutch trey, and the two clinching free throws). She added 6 rebounds. Webb finished with 15 points, including four straight paint baskets during the second-quarter recovery.

“I thought early, they were the more aggressive team,” Allen said. “I told my girls we had to get more aggressive. I think we did in the second half. We were just fortunate enough to make some pays. Two good teams going at it, toe to toe.”

Trabel was 10 of 15 from the field and added 7 rebounds. Remember that name for future reference. BNL won’t forget her and the anguish she caused. She, plus the 17 points from Fox, forced BNL into overdrive.

“They definitely adjusted,” Trabel said. “The intensity, it got loud and it got really tense in here.”

“TheIr kids were very physical with her,” East Central coach Kevin Moore said. “You almost have to play perfect. For Gracie to step up and hit that shot, they deserved to win. Bedford earned that one. We didn’t lose it, they won it. They had kids out-play the scouting report.”

Haley Deckard was one of those, hitting two first-half 3-pointers. Norman totaled 7 points.

BNL (21-5) advanced, out of breath, to the one-game semistate on Feb. 22. The Stars will face No.8 Lawrence North, a 58-57 winner over No.11 Brownsburg in the regional final at Decatur Central, at either Jasper or Jeffersonville.

The Stars will now seek their first semistate since the last of the back-to-back state titles in 2014.

“If you would have asked me about this before the season, I would have said ‘I don’t know,’” Allen said. ”You lose a Miss Basketball, most programs don’t think about this. It shows the depth of talent, a great community with kids that want to be good. We’re fortunate to be here.”