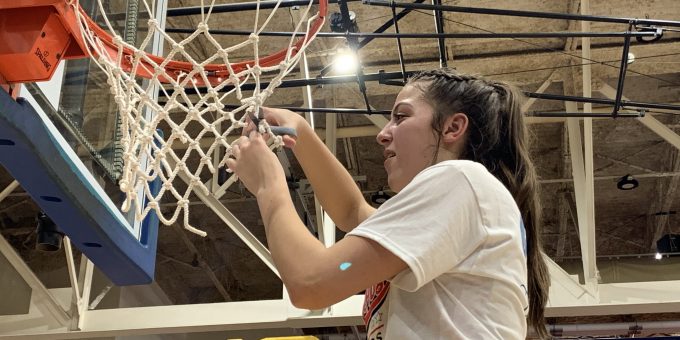 BEDFORD – When the 2019-20 season was about to unfold, Bedford North Lawrence coach Jeff Allen had concerns. Of course, every coach is a pessimist when looking forward, worrying about worst-case scenarios. Their job is identifying weaknesses and – if possible – correcting them.

The Stars, after their June scrimmages, even after the first six games of the campaign, had issues. Turnovers and rebounding. A single word summed it up: toughness. Could BNL become rawhide and leather, or remain soft and delicate?

BNL had to become Mean Girls, and everyone had to join the clique.

The transformation took time. BNL started 3-3, and those three losses could be encapsulated by the turnovers (especially during second-half stumbles when the pressure was applied) and rebounding. But since then, and especially following that eye-opening road trip to national power Mount Notre Dame, the Stars have been more gristle and grit.

“Early on in November, when we struggled against pressure, we focused on that and the kids understood we needed to get better against that,” Allen said. “Then when we had a lapse defensively, when teams scored in the 60s on us, we felt that was lapsing. And the kids refocused on that.

“So those two areas have made us a better basketball team. Even though we stumbled, it gave us the opportunity to go back to work and get better. They took ownerhsip of that. They put a lot of effort in it and that’s brought us along where we can play at a high level.”

How high? BNL (19-5) is the favorite, according to the Sagarin ratings, in the Class 4A regional at Columbus North on Saturday. The Stars will face Evansville North (20-5) in the second semifinal, while East Central (22-5) and Franklin Central (15-11) will clash in the opener at 10 a.m. The championship is set for 7:30 p.m.

Games aren’t played on paper or computers. BNL will have to earn it against quality competition. Sectionals are not won by accident or luck. The Stars will have to continue to stress the keys that got them to this point. Protect the ball, grab the ball, defend the ball.

“We knew those things could make us lose, if we did lose,” junior forward Irye Gomez said. “We knew to get better, that was what we had to do.”

The start was sluggish. At Mooresville in the opener, 15 turnovers and a 43-29 board deficit. At North Central, 19 turnovers and a 29-23 rebounding margin. Against Jeffersonville, a second-half meltdown as an 18-point lead vanished.

“We realized we were going to play higher competition, and everybody plays their best game against us,” Gomez said. “If we wanted to come out with a win, we had to rebound.”

Toughness cannot be measured, but it can be seen. Chloe McKnight, wading into scrums under the basket to rip away rebounds. Madison Webb, limping off with a sore ankle in the sectional final and coming back to dominate. BNL’s three-guard rotation, sticking their noses on a scorer’s belly button.

BNL’s defense, which got a little lazy during back-to-back games in late January, has been brutally brilliant the last four games.

“It’s sticking together,” BNL senior Gracie Crulo-Rood said. “We got down at the beginning of the Jennings County game, but we knew if we all came together and played the defense we know we can play, we’d come it with a win.” Jennings had 14 points after the first quarter, finished with 18 the last three.

BNL ranks 20th in the state in scoring at 59.9 points per game, and the multiple weapons make the Stars difficult. But on nights when the rims get tight and perimeter jumpers don’t fall, the Stars are still formidable.

“That’s why you have to defend,” Allen said. “That’s going to happen sometimes, I don’t care how good you are or what level you are. That will happen. But if you defend consistently, you’ll get through those times.”

BNL now owns another advantage: experience. The Stars are making their ninth straight regional trip, which means everyone on the roster (save for freshman guar Karsyn Norman) has been there. Some have won it (in 2018). The rest of the field hasn’t been there in years.

“It’s important to know the level of play,” Crulo-Rood said. “You never know what could happen. We’ve already been there, so it’s nice to know what it will be like.“

“When you haven’t played in a regional, you don’t understand the intensity and emotions involved,” Allen said. “It‘s very draining from a physical standpoint. I think our kids are adapted to that because we’ve had the fortune to play in one every year.

“We understand how we need to prepare, what it will be like from an emotional standpoint, and the physical toll. These teams play at a higher level than the other teams that you face in the sectional. You have to be prepared to put out a lot of energy.”

BNL is the target team that gets the best shot. The Stars are ready for that.

“We have to handle ourselves, make sure we play under control,” Gomez said. “Be the calm team.”

“The teams are a lot better, so you know you’ll have more competition,’ McKnight said. “You just play harder, play smarter.”