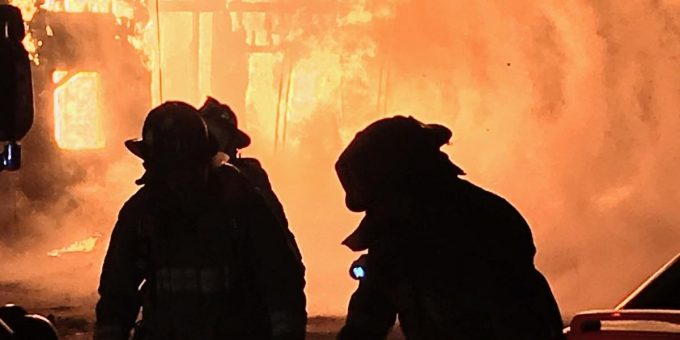 (MITCHELL) – Firefighters from Mitchell and Marion Township and Shawswick Volunteer Fire Departments battled a fire at a rooming house at Fourth and Warren streets early this morning.

Also on the scene was an AMR ambulance crew and officers with the Mitchell Police Department.

Firefighters arrived at the scene around 1:15 a.m. to find the building engulfed in flames.

Firefighters battled 14-degree temperatures and strong gusty winds to bring the fire under control. The strong winds caused embers to blow across the street and firefighters worked diligently to keep the fire contained to the one building.

According to neighbors the occupants of the building left sometime last week and no one was staying there. There was no injuries while battling the blaze.

The building is owned by John Gass.

“I was awake when my roommates told me about the fire,” said Kevin Williams who lives across the street. “At first we were concerned about our house catching on fire, as winds were strong and blowing embers towards our house. My kids have COPD so we took them to another location because of having to breath the smoke.”

Firefighters were on the scene for several hours and returned early this morning to deal with several hot spots.

The cause of the blaze remains under investigation.