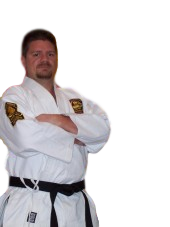 This event is the largest martial arts event in the world with more than 10,000 participants attending the Action Martial Arts Magazine Hall of Honors Expo with more than 1,300 in attendance at the Awards Banquet hosted by Sifu Alan Goldberg. This event is the world’s premier martial arts event, bringing out the who’s who of film stars including Cynthia Rothrock, Michael Jai White, Demetrius Angelo, Maurice Elmalem, Phil Morris, Demetrius Angelo, Robert Samuels, Fred “The Hammer” Williamson, Don “The Dragon” Wilson, and others. This is the martial arts motivational book for the 21st-century martial artist.

To date, Master Clift has been inducted into seven Martial Arts Halls of Fame and received the prestigious Lifetime Achievement Award from Arnold Schwarzenegger for recognition of achievements in the martial arts and continues to work for improvement in the Arts. He competed in martial arts tournaments nationwide from 1992 through 2002. Other accomplishments include providing personal executive security for various celebrities including Lakewood Church Pastor Joel Osteen, Eddie Bauer, and Arnold Schwarzenegger among others.

Master Clift has focused on mixed martial arts since 1999 and became Indiana’s first licensed MMA Referee, MMA Judge under the auspices of the Indiana Athletic Division of the Indiana Gaming Commission and has worked as a professional judge, referee, inspector, and state representative providing oversight of amateur MMA and kickboxing events for KICK International. He continues to work in several capacities to improve the integrity, safety, and fairness of all martial arts athletes in both mixed martial arts and works closely with Terrance “Tokey” Hill, United States Olympic Committee Karate Coach of the Year, in the logistics and floor operations for the Arnold Martial Arts Festival among other events.

Master Clift is married to his wife, Lisa, and has 3 children and 5 dogs. He currently resides in Heltonville, Indiana.