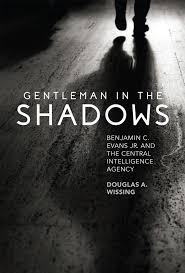 (INDIANAPOLIS) – The latest release from the Indiana Historical Society (IHS) Press tells the story of one of the most powerful people you’ve never heard of. “Gentleman in the Shadows: Benjamin C. Evans Jr. and The Central Intelligence Agency” by Douglas A. Wissing is the first-ever biography of Hoosier native Evans, a covert CIA officer and top-level executive during the darkest days of the Cold War.

The latest release from Bloomington-based author and Indiana University alumnus Douglas A. Wissing tells the story of one of the most powerful people you’ve never heard of.

Born and raised in Depression-era Crawfordsville, Indiana, Evans attended Wabash College and Culver Military Academy before graduating from the U.S. Military Academy at West Point. He served 11 years in the U.S. Army before joining the CIA, where he quietly ran the vast government agency as elected leaders came and went. A CIA officer for more than 20 years, Evans deftly managed the CIA through four presidents and seven directors of central intelligence.

Crafted in part from family archives, CIA documents and on-the-record interviews, “Gentleman in the Shadows” paints a portrait of a man who is both relatable and mysterious. While at home he was known to entertain guests with a rendition of “Back Home Again in Indiana” at the piano, Evans’s career involved helping make and execute world-shaping CIA decisions through the depths of the Cold War. From his early career as a clandestine officer in revolutionary Cuba to his days as a CIA executive in Washington during the harrowing Cold War missile crises and the Watergate and Family Jewels furor, Evans was a player in major events in American history.

Although “Gentleman in the Shadows” is a book about Evans, it’s also a story about CIA families and the prices they pay for their service. Evans’s widow, Jan King Evans, is a scion of old Washington aristocracy. Her family archives and recollections shared during hundreds of hours of interviews provide a privileged view into the private life of this ever-discrete intelligence official. Interviews with other family members and close friends also reveal rich detail, such as Evans’s toddler daughter Karla dragging her beloved Fidel Castro doll through the family’s Havana villa as her father ran a string of secret anti-Castro agents.

When Evans retired in 1981, the CIA awarded the Hoosier native the Distinguished Intelligence Medal, one of the agency’s highest honors. Upbeat and positive even in the face of some of the CIA’s darkest days, Evans once wrote of his time with the CIA, “I’ve never had a dull day and perhaps due to some ‘character flaw’ enjoyed each one.”

“Gentleman in the Shadows” is available through IHS’s Basile History Market and other places books are sold. For more information about the book or IHS Press, call (317) 232-1882 or visit www.indianahistory.org.

About the Author
Douglas A. Wissing is an award-winning journalist and author of numerous books, including “Hopeless but Optimistic: Journeying through America’s Endless War in Afghanistan,” “Funding the Enemy” and “Pioneer in Tibet.” He has written for the New York Times, Washington Post, Los Angeles Times, Foreign Policy, Politico, Traces of Indiana and Midwestern History, the BBC and CNN.com, among other publications.