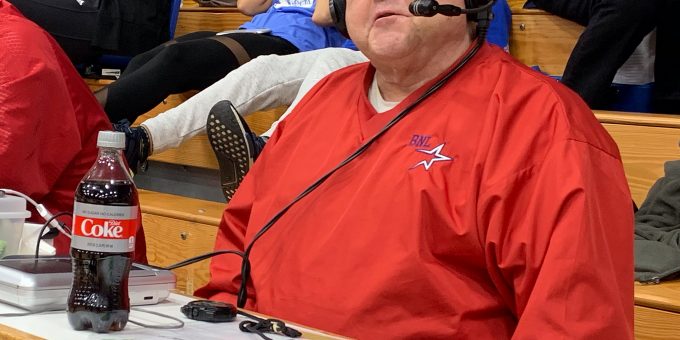 BEDFORD – The “Voice of the Stars” will be moving to a new, permanent home.

Nearing the end of his remarkable 40-year career broadcasting Bedford North Lawrence athletics on WBIW, Rainey will be enshrined in the Indiana Sportwriters and Sportscasters Hall of Fame. The induction ceremony is scheduled for April 5 in Greenwood.

Rainey has been the soundtrack for some of the biggest moments in BNL sports history, including five state championships in basketball. He chronicled the careers of Damon Bailey, Danny Bush, Pete Pritchett and other members of the Indiana Basketball Hall of Fame along the way. He also called BNL football games from 1979 until the conclusion of the 2013 season.

He will join many peers, including the late Charlie Jenkins (of Southern Indiana fame) and those whose voices he followed and emulated during his radio career.

“It means my peers, who have been doing this years before I have, think enough to nominate me, let alone elect me,” Rainey said. “Being a member of that group, with the voices you hear and the stories that are written, it’s something else.”

Radio was not Rainey’s primary career (he’s been an elected Lawrence County official as the recorder and clerk, among other things), but it was his first passion. He fell in love with the idea of broadcasting while watching Indiana legend Dick Enberg and former BNL star Bob Pettit announce the “Game of the Century” between UCLA and Houston in the Astrodome in the 1968.

“I was absolutely enthralled by those guys broadcasting a basketball game and getting paid for it,” Rainey said. “That was cool. So I had that in the back of my mind all those years.”

“John and Al were icons,” Rainey said. “I sat and listened to them, and it was like they had a lot of fun. It is a lot of fun. The good thing that helped was John hung around, and thankfully we worked games all those years – although I’m sure sure it took a while for me to accepted.

“I also learned by watching others. I was told to watch Charlie Jenkins, to see how he prepped to do a ballgame. He was really meticiulous. I tried to follow suit.”

When Rainey first started, the logistics (adding phone lines, bad connections) of getting on the air from small gymnasiums across the state could be daunting. “It’s come a long way,” Williams recalled. “Myron, who used to change tires at Indiana Petroleum, was up to the task and has worked very well.”

What a journey for the 1970 Shawswick graduate. He called the 1983 girls state championship, the unforgettable ‘90 boys title with Bailey’s heroics in the final game, the four-overtime thriller with Jeffersonville in the 1999 sectional at Seymour, countless other games. They become a blur after so many years, but the memories and relationships remain.

“Each and every one of the state championship games, those are paramount in your mind,” Rainey said. “Some of the ballgames you truly forget, some of the names you forget, but it’s the outside things, the thousand little things you remember. Those are the things down through the years.”

How many miles as Rainey driven? Countless. He does know it’s exactly 72 miles from his driveway to Johnson Arena in Jeffersonville, and he likely knows the exact number to several other usual destinations (plus all the best places to eat along the way) on the BNL schedule.

“The first few years, 72 miles is fun,” said Rainey, now 67 years old. “Now that seems like 172. After a while, it gets weary being of the road. I would just like to kick back and relax, not worry about where I have it be when I wake up in morning. We broadcast five ballgames (two BNL boys and three with the girls in the sectional at Jennings County) this past week. I wake up and wonder what day it is and where we have to be. Maybe now I will reintroduce myself to my wife. But it’s been a ton of fun.”

Rainey and current sidekick Steve Pinnick are known for their critiquing style when it comes to calling the action and letting the audience know how the game officials are doing.

“John and Al were unabashed homers,” Rainey said. “I try to temper my thoughts, try to temper my comments if at all possible. My buddy Steve makes no bones about it. But they are our kids out there, and if we see something not quite right, we’re not ashamed to say something.”

What will he do now? Possibly work as the public address announcer, which seems to be a logical fit. He will retire from the public airwaves with his own personal booth above the northeast corner of BNL Fieldhouse, and he’ll be forever enshrined in the Hall.

“I couldn’t believe it,” Rainey said. “That was a big surprise. I’m blessed to have that. I’m thankful.”

His peers are pleased with his addition to the Hall.

“I have treasured my friendship with the ‘Rain Man,’” said veteran Columbus broadcaster and ISSA board member Sam Simmermaker. “For decades, he’s been a shining star in the BNL galaxy. He’s a Hall of Famer in every sense of the word. Speaking as a member of the board, he was a slam-dunk selection.”