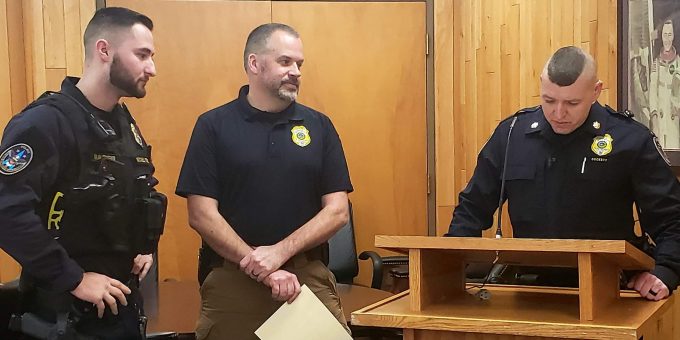 (MITCHELL) – This week Officer Michael Bargo received a Letter of Commendation for his actions on January 15, 2020.

On January 15th, Officer Michael Bargo was dispatched to a vehicle that had run off of the road with possible entrapment into the river near Lawrenceport Road.

The caller told the dispatcher they could hear screaming and someone yelling “help me”’ coming from the vehicle.

Upon arrival, Officer Bargo saw a vehicle approximately 50 feet off the road in the river, with only the top of the vehicle visible.

Officer Bargo began screaming to the occupants of the vehicle and did not receive a reply.

With no regard for his own safety and an outside temperature of 37 degrees, Officer Bargo entered the frigid waters to rescue those who may have been entrapped in the vehicle.

Officer Bargo was evaluated by EMS personnel for the prevention of hypothermia, and released from the scene.

Chief Justin Shirley says Officer Michael Bargo’s prompt selfless action sets the example for others to follow and is in keeping with the highest standards of the Mitchell Department, the state of Indiana, and all law enforcement.