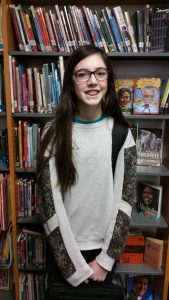 (BEDFORD) – Meryl Klein, a 7th grader at Shawswick Middle School, is the 46th Annual WBIW Lawrence County Spelling Bee Champion presented by Ivy Tech Community College of Bedford. Meryl is the daughter of the proud parents of Brian and Marie Klein of Bedford.

Meryl says she credits her winning to her mother Marie Klein.

“I credit winning to genetics and I read a lot,” Meryl said. “I was not expecting to beat out the family of the good spellers (the Voigtschild family),” she added.

Marie Klein, Meryl’s mother, was a spelling bee champion in the towns of Richmond, Indiana and Dayton, Ohio.

The second and third place race was between a brother and sister, Paige and Quentin Voigtschild. Quentin is an 8th grader and Paige is a 5th grader at their home school. Paige was the returning Elementary School Champion from yesterday’s event. Both Paige and Quentin are homeschooled and both have accomplished advancing to the WBIW Lawrence County Spelling Bee before.

Meryl will now have the opportunity to advance to the 2020 Ford Motor Company Kentucky Derby Festival Spelling Bee on Saturday, March 14th at the Bomhard Theater at the Kentucky Center for the Arts. The competition will begin at 10 a.m. Should Meryl not be able to attend the March 14th spelling bee, Paige will be expected to represent Lawrence County.

You can listen to a playback of the competition on the airwaves of1340 AM WBIW or streaming online at WBIW.com at 6:30 p.m.

All participants received a WBIW Spelling Bee t-shirt and a certificate. The top three contestants representing Lawrence County also received a bee bobble-head trophy. Champion Meryl Klein received a $100 cash prize provided by Bedford Federal Savings Bank, the bee bobble-head trophy, a certificate of participation, a tee shirt and a Pappa John’s pizza party for her home room class. You can tune into WQRK 105.5 tomorrow morning to learn more about Meryl as she interviews on the Sean Duncan Show in the 8am hour.