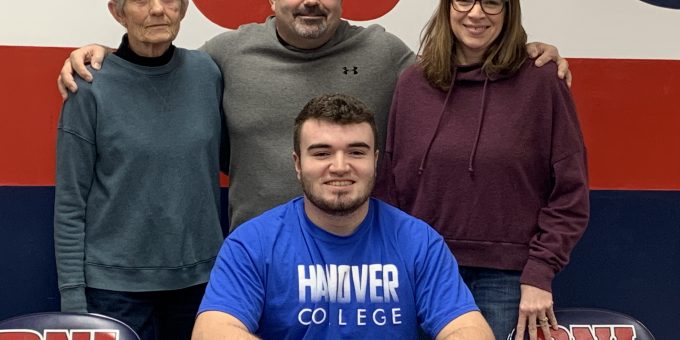 BEDFORD – The Hanover football pipeline to Bedford North Lawrence added another link on Tuesday as senior Jacob Hobbs signed his letter of intent with the NCAA Div. III power.

Hobbs, a defensive end and offensive lineman for the Stars, will join former teammates Roman Weber and Drew Shoufler with the Panthers, who are coming off a 9-2 campaign and their second straight appearance in the Div. III playoffs.

Hobbs was a key defensive piece for the Stars, who went 8-3 during his junior season and 3-7 last year. He recorded 39 tackles and a forced fumble as a senior, making the move from linebacker for his final two seasons.

“Defensive end was more fun,” Hobbs said. “It was a change, having to know all the reads with the offensive line and the quarterback. But it was a little less tiring and let me play better both ways.”

Hobbs, who plans to major in mechanical engineering, chose Hanover because of its culture and proximity.

“I wanted to be close to home,” he said. “I felt like the culture, and the coaching staff around me, really brought me in as family.

“Knowing I would have some friends down there helped, but I’m ready to meet some new people in college and move on. I’m ready to make my own name.”

Hanover has thrived under fourth-year coach Matthew Theobald. The Panthers started 4-6 his first season, then went 7-4. They fell to No.1 Mount Union in the first round of the playoffs in 2019.

“He’s doing a great job down there,” BNL coach Steve Weber, a Hanover alum, said. “He’s turned it around. Hopefully we get a few more down there. It’s a good place. Jacob is going to do well. They’ll find a place for him.

Hobbs expects to play on the defensive side as a walk-down hybrid defensive end. He will apply the lessons learned with the Stars.