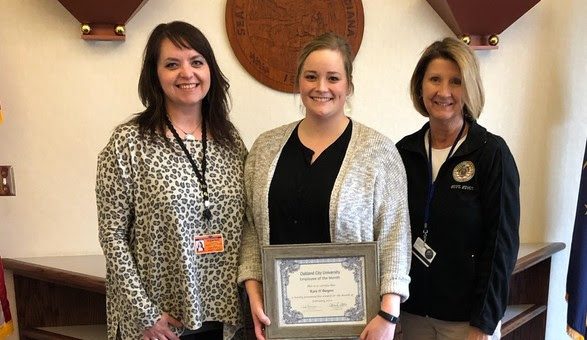 (ROCKVILLE) – On February 5, 2020, Kara Burgess, Site Manager for Oakland City  (OCU) at the Rockville Correctional Facility (RCF) received Employee of the Month honors.  Ms. Burgess has been site manager at RCF since 2014.

As site manager, Ms. Burgess oversees educational programming, teachers and offender progress within the correctional facility.  She works directly with the Indiana Department of Correction (IDOC) staff and administration to ensure the success of students within the program and ultimately, upon release.

Ms. Burgess was nominated by her Regional Coordinator, Heather Robertson who states that Kara has consistently met goals set forth by the Department of Workforce Development (DWD), OCU and IDOC to take her school to the top of performance excellence.

Recent information from DWD indicates RCF ranks #1 in High School Equivalency completers per teacher. RCF also serves as the subject matter expert and starting point for other facilities for use of policy, handbooks and procedures. Kara maintains a professional and hands-on relationship with RCF staff which encourages a cooperative and successful path for the success of students at RCF.

OCU congratulates Kara and is grateful for her dedication to detail and ability to create a team environment with her staff.