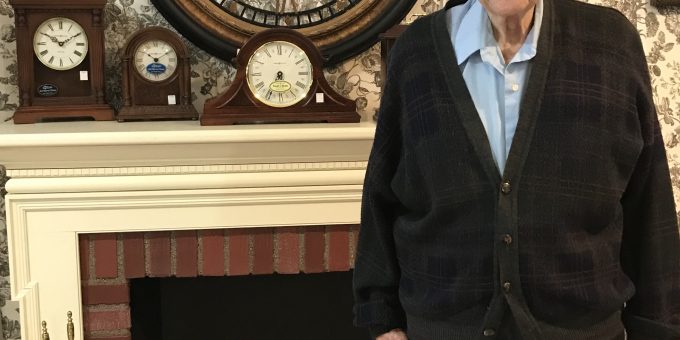 (BEDFORD) – David Jacobs has been asked by people – “How much longer you plan to live?”

David Jacobs, owner of the Bedford Furniture Galleries, reflected on 98 years of living. Jacobs is very proud of the community he grew up in and the life he has created in Bedford.

His dad lived to be 107 years old. When Abraham was around the age of 101 or 102 he told his son – “David, do not worry the first hundred years is the sabbath.”

Abraham’s parents were the owner of one of the largest tanneries in Russia. They furnished all the leather for the Czar’s army.

His grandfather knew all the Czars and their families, personally. Periodically the Czar would invite them places.

“My mother and grandmother got to meet the Czar and all their children,” Jacobs said.

During that time, the family was allowed to do business in Germany and all the surrounding countries. However, he could not leave without permission from the Czar.

Jacob’s grandparents decided they did not want their children in the Czar’s army. So they figured out a way to get the family out of the country.

They got barrels of fish that they would take to Germany and sell. They fixed up the barrels, gave the kids a sedative, and put them in barrels of fish, and took them across the border, Jacobs said. The people at the border told them to catch a train at Bremen, in Germany, and from Bremen catch a ship to the United States.

“My brothers did that, but my Dad and his brother got off at a different stop than Bremen. They missed a ship that was supposed to sail, and they got on a different ship. The ship they were supposed to get on sank in the Mid-Atlantic without a trace. By the Grace of God, they arrived in the United States,” Jacobs added.

“My mother’s father was a professor at the University of Austria who could read and write major languages and European dialects,” Jacobs said. “This was where my mother learned to make strudel. She went on to work for the German Llyod Steam Company.”

“My father’s family were mechanical and electrical engineers and came to Chicago and immediately got jobs,” Jacobs continued. “My dad’s oldest sister Mary G. Jacobs was the first woman to manage Equitable Trust Life Insurance Company. Back in the 1920s that is something that was not heard of for a woman during that time period.”

Bedford Furniture Galleries was first owned by M.B. Goldman, from Charlestown, South Carolina, and his brother managed the Bedford location.

Bedford did not have much of a nightlife, so Goldman’s brother stated that he rolled up the sidewalks at 8 p.m. because no one was downtown.

“He no longer wanted to manage the Bedford store. He eventually just let my father run the store,” Jacobs said.

Jacob’s family came to Bedford from Champaign, Illinois back in 1909. He became familiar with Bedford from being a salesman.

Bedford residents were making more money per capita than most locations, due to the Limestone industry.

“Many residents in Bedford were making 50 cents to a dollar a day,” Jacobs added.

“During the depression, the owner borrowed money from my dad to pay the property taxes and made him a partner,” Jacobs said. “This occurred in the 1930s and by 1949 my dad bought him out.”

David Jacob’s bought out his father in 1969.

Where Bedford Furniture Galleries is located now is not the first location of the store. It was moved some 75 feet to make way for the Greystone Hotel back in 1921.

Jacobs says it took several months and back-breaking work to get the project completed, with no machinery to do the job.

After the foundation was secured, they added the steps and hired a contractor to add the brick.

“My dad mixed the mortar for the crews,” Jacob added. “My dad hired the contractors from Indianapolis to do the work. He went up to Indianapolis to the Brick Layers Union and told them he would pay them union wages and a half. However, he wanted the best point man and the best team in the State of Indiana.”

The brick used in the construction came from the Medora Brick Factory which was paving brick. It’s the same type of brick that was used to pave the Bedford Square. Paving brick itself was a lot larger than regular brick and still remains on the building to this day.

David was born December 8, 1921, and reminisced about his life with his two brothers and one sister.

“We lived around H Street where the fire station is now. And of course, Lincoln School was located near there. And Mrs. Rupp would send the kids over to my mother that needed cleaned-up or some attention. And sometimes some of our used clothes ended up on some of these old children.”

During the Depression, all the neighbors helped one another out.

“If the woman of the house was sick, the ladies would come over and clean the house and made sure the children got off to school okay,” he added.

No one had enough to buy food, so everyone pitched in; one family may provide ham and beans, another cornbread and so forth and that how everyone was fed.

Back in the Depression, 70 percent of the homeowners in Lawrence County lost their homes.

“So we didn’t have two mortgages, we moved into the top floor of the furniture store,” she added.

David was friends with George Brooks. Both were violinists in the orchestra. David and George both became Eagle Scouts and were friends throughout high school. George’s brother Bobby Brooks was one of the best trumpeters around. Bobby ended up playing in the best bands around the country. Sadly Bobby became addicted to drugs and overdosed and died in the 1940s.

His brother Prenes died in 1990, and his oldest brother Morris died at the age of 18, from a strep infection of the brain. His sister Joy Merla was 90 when she died.

David had three children. The first daughter Janice Lee, passed away two days after her birth.

“This death had a huge impact on my wife,” Jacob said.

The Jacobs then had two sons; Morris Allen and Michael David who was always known as Mikey.

“My oldest son died in a car accident coming home from Camp Atterbury from the National Guard,” Jacob added.

“Bedford has a real good future as long as General Motors stays, and we keep adding industry. Especially, with 20-50 employees,” said Jacobs. “Bedford has good infrastructure, better than most communities and this will help keep our community growing. Bedford is a friendly community. And the Limestone Industry continues to thrive yet today.”

“I want everyone to become involved in their community and give back. Always try to help someone, acknowledge them, even though you may not always agree with them say ‘Hi’ or ‘Hello’ and acknowledge them as a human being,” Jacob exclaimed.

Over the years Jacobs has been active in the community with more than 68 years in the Boy Scouts, and a 73-year member of the Legionnaires.

“When the Legion celebrated those 70 and over there were 12 of us since then many have since passed,” he added.

Here is a list of some of the Community Organizations Jacobs helped with over the years.

“I have a good life and enjoyed every minute of it,” said Jacobs.