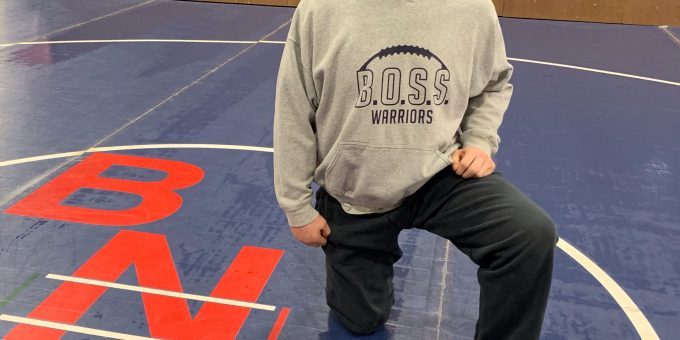 BEDFORD – Lynyrd Skynyrd wailed for a three-step head start toward the door during its 1970s classic rock hit. Bedford North Lawrence junior James Covey only needs two to reach his door, which leads to a dream destination.

Covey will compete in the IHSAA wrestling semistate at Evansville’s Ford Center on Saturday, needing to win his first two matches to qualify for the state finals at Bankers Life Fieldhouse on Feb. 21-22.

Two steps, two victories. Seems so close, and yet so far. At this level, there are no more walkovers, no more mat patsies. Everyone in the 16-man field (regional qualifiers from Bloomington, Jeffersonville, Evansville and Mooresville) has earned his place. This is serious business.

Covey (32-4) will collide with Brownsburg freshman Leighton Jones (34-4) in the opening round of the 220-pound weight class. That winner will face either North Posey senior Nathan Willman (39-1 and ranked No.6 in the state) or Madison senior Tucker Adams (31-16) in the quarterfinal. The top four will advance to the final stage of the state tournament series.

Covey, BNL’s lone semistate qualifier, reached this level by winning the sectional, by finishing third in the regional. He is laser focused on the task ahead.

”I want to make it pretty far,” he said. “My mindset is to get past those two matches, go on to state.”

His journey to this point actually started in sixth grade, when he watched his cousin on the mat and decided that looked like fun. Beating on kids. “When I started to take down everyone, it kind of stuck to me,” he said. “That’s what I fell in love with.”

Covey actually tips the scales at 215, which means he doesn’t have to worry about shedding extra pounds of sweat before the meet or crash dieting to stay under the class limit. He’s lean, mean, big and bad. But so is everyone else.

“At this point, it comes down to who wants it the most, who makes the least amounts of mistakes,” BNL coach Greg Stevens said. “If you make a mistake, you’re going to pay for it. You have to go out there and not hold back, leave everything on the mat.

”If he does everything right, stays aggressive, keeps low, keeps his wrestling tight, he has a good chance. At this level, they’re all good and they can all beat each other at any time. You’ll always have your hands full, it doesn’t matter.”

Covey is facing a mystery opponent, unfamiliar with his moves or style. That means some searching on the Internet for information to compile a scouting report. He will rely more on his inner strength and recent experience. The unknown does not concern him.

“I don’t really look at it that way,” Covey said. “I look it as another person that I’m wrestling. He could mess up, I could, too. Anything could happen. I’ve learned from my losses. I know what not to get into the next time.”