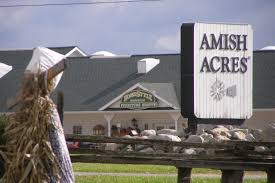 (NAPPANEE) — A popular northern Indiana tourist attraction that provides a glimpse into the life and history of the Amish will continue operation for the foreseeable future following an auction of the complex.

The new owners of Amish Acres’ tourism-related components said they plan to continue using the facilities to host stage events as well as an annual arts and crafts festival but will likely make some changes.

Former U.S. Rep. Marlin Stutzman and two partners paid $1.55 million during Wednesday night’s auction for the 400-seat Round Barn Theatre and other tourism-related components of the complex, which is located 30 miles (48 kilometers) southeast of South Bend and includes historical cabins, barns, and other structures.

“We want to build on top of the legacy,” Stutzman said, adding that music and other shows could be added.

He and his partners aren’t sure whether they will retain the name, but they anticipate being able to open in the coming months. As is typical, Amish Acres closed on New Year’s Eve and generally doesn’t reopen to the public until spring.

Richard Pletcher and other family members built up the complex over 50 years into a tourist destination that has attracted about 150,000 visitors annually. Pletcher said they decided to auction the site because keeping it going is an exhausting “a year-round effort.”

Besides the tourism component, the site’s 62-room inn went to a separate buyer for $1.29 million, with other lots, homes and buildings making up the remainder of the $4.25 million auction tally, the South Bend Tribune reported.