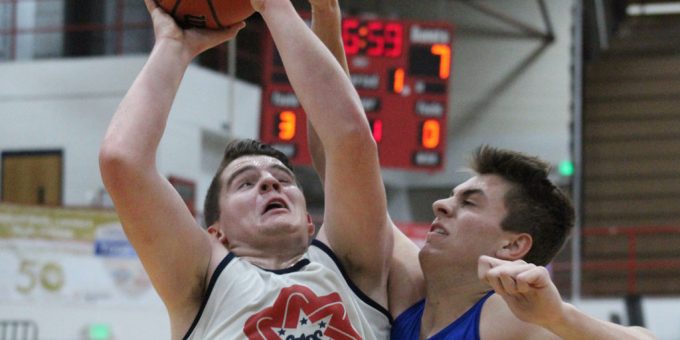 BEDFORD – Perseverance is defined as “persistence in doing something despite difficulty or delay in achieving success.” Also see determination, resolve or endurance.

His senior banner hangs above the south end of BNL Fieldhouse, a symbol of the staying power it took to reach the end. Sasser and classmate Brayton Bailey will be honored on Tuesday night when Bedford North Lawrence entertains Loogootee. They are the last men standing.

Sasser’s story could be written about thousands of high school basketball players. Toil out of the spotlight, rewarded with sparse playing time. Does he mind? Not at all. Sasser is the ultimate in team first, self second. His payment is the honor in wearing the jersey.

Every program needs a Sasser, the role model, the guy who recovers from injury, the guy who treats practice like the NCAA Tournament, the kid who leaps from the bench when his name is called. You’ve never seen a warm-up shirt come off so fast.

“He’s at the scorer’s bench as soon as he can get there,” BNL coach Jeff Hein said.

“He just keeps battling,” Hein said. “He’s a great kid to have in the program because he’s a great role model for the younger guys, to see when things don’t go your way, how you handle it and make the most of opportunities. He’s made the most of his opportunities this year.”

Sasser has had his moments. He started the first two games of the season, against Bloomington North and Bloomington South, then was shifted to a reserve role. Some seniors would have taken that move as a demotion and pouted. How should it be viewed?

“Just stay positive,” Sasser said. “Don‘t worry about it, because it’s going to be all right in the end. There’s bigger things than this.”

Sasser has seen limited action for the Stars (12-8) since, playing in 17 games, scoring 12 points. His shining moment came against New Palestine in the final round of the Danny Bush Classic, when he scored 7 points and grabbed 6 rebounds during a 70-55 win.

“Every dog has his day, and he’s had some days where he’s played really well and given us good minutes,” Hein said. “He just enjoys being around the guys, being part of the program. He just wants to see us be successful. He’s as happy in the locker room after we win if he’s played two minutes or 15 minutes. That’s great to see. In this day and age, it’s hard to find.”

His personal favorite? The recent victories over Jeffersonville and Floyd Central. He didn’t score in either. Doesn’t matter. His team, his friends, have won five in a row. That’s what counts.

Until his next opportunity, Sasser will study the action on the floor, waiting for the call, ready to answer it, hands ready if Bailey drives the baseline for one of his patented quick passes to the post man under the basket.

“I’m just seeing who I would guard, their tendenancies, be ready for the matchup,” Sasser said. “I try to get a lot rebounds, try to judge where the ball will come off and be in the right spot.”

“He’s had some big games for us,” Hein said. “He’s been able to provide some good minutes. The problem we’ve had for him is getting a good matchup on the defensive end, because he’s primarily an inside guy and most of the teams we’ve played this year don’t play a true post.”

Senior Night can be an emotional struggle for those who last to the end. Following his career, he plans to attend Ivy Tech or Vincennes University and pursue a degree in business or welding. His game reminds one of a welder, piecing things together with heat and iron.

“It won’t sink in until a few days later, when you realize you won’t play here again on the home floor,” Sasser said. “It’s so fun, being with the team, all the shenanigans that go on. I wouldn’t trade it for anything.”