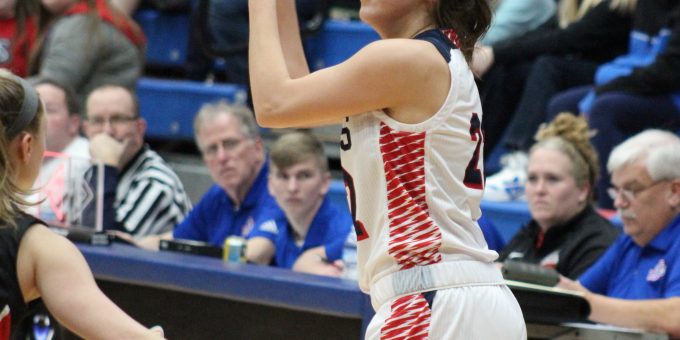 NORTH VERNON – The streak has been incredible. Few programs across the state have won eight consecutive sectional championships, going the longest route possible each year to achieve that.

Can Bedford North Lawrence keep that alive? The Stars, the overwhelming favorite according to power ratings and ‘expert’ opinion, will face a tough test in the final on Saturday night.

No.15 BNL will clash with Jennings County in the championship game, a rematch of a regular-season battle that was closer than the 53-43 decision indicates. The Panthers (10-14) had BNL in squirm mode, shooting to a 37-37 deadlock after three quarters. The Stars expect more of that and less of the blowouts like the first two rounds.

The Stars are playing their best defensive basketball of the season, surrendering only 53 points combined to Seymour and New Albany. They are the defenders, they wear the crown until someone rips it off.

“We deserve to be here, but we’re not entitled to a championship,” BNL coach Jeff Allen said. “We have to go out and earn it. We’re going to play with that type of intensity on the defensive end, and we’ll have a good chance to do that. We have to make sure we’re focused and ready to go, like we have been the first two games.”

BNL’s focus will be on JC star Addyson Kent, who was out-of-this world hot during the first encounter. She stroked home 8 treys, most from unguardable range, closer to midcourt than the free-throw line, and scored 27 points to keep the Panthers in upset range.

The Stars answered with Madison Webb’s 17 points and 11 rebounds, and her size advantage will be one of the keys. The other will be BNL’s pressure. The Stars have thrived on turnovers.

“We’ve got to take care of the basketball,” Jennings coach Kristi Sigler said. “It’s their man-to-man and how aggressive they are. We have to keep them off the offensive glass. They just don’t take a break. If you do, they will find a way to make you pay.”

The Panthers got to the final with a 52-45 victory over short-handed Jeffersonville in Friday’s second semifinal. And they did that with a limited contribution from Kent, who had only 6 points. Lily Ernstes had 21 points and Kali Thompson totaled 18 against the Red Devils.

“Other people stepped up, which is great to see when Addyson doesn’t have a great offensive game,” Sigler said. “Maturity wise, we’ve grown over the course of the season. We’ve been a lot of games, and our record may not show that. We’re just a couple of possessions per game away.”

BNL forced 20 turnovers in the first meeting with Jennings, and they forced that many in each of the first two sectional games.

“We’re very pleased, very excited,” BNL junior Jenna Louden said. “It’s going to be a tough game. But if we play like we’ve been playing, we’ll be fine.”

Jennings is seeking its first sectional title since 2005.

Last meeting: On Dec. 3 at Jennings County, the Stars prevailed 53-43. Madison Webb had 17 points and 11 rebounds as BNL pulled away in the fourth quarter. Addyson Kent hit 8 3-pointers and scored 27 points for the Panthers.

Game notes: BNL has won 26 straight sectional games and 18 straight in the series with Jennings County. The winner will face the victor from the Evansville sectional in the second game of the regional at Columbus North on Feb. 15.