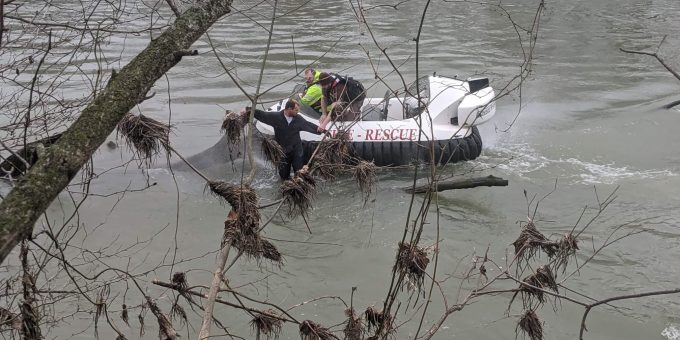 Deputies received information that Dillman was in the 1600 block of East County Road 300 North in the Shieldstown area.

Sheriff Rick Meyer, Chief Deputy Dustin Steward, Lieutenant Adam Nicholson, Sergeant Ben Rudolph, and Deputy Brad Barker went to the location and found the vehicle Dillman had been driving. Dillman, however, was not there.

Deputy Barker located footprints that lead west from the residence along the bank of the White River. Deputy Barker followed those footprints while the other officers checked the surrounding residences for Dillman.

Deputy Barker found Dillman hiding along the river bank about 1/4 mile west of the original address. As Deputy Barker attempted to take Dillman into custody, Dillman fled and jumped into White River. Dillman swam approximately 15-20 feet into the River and held onto a log.

Dillman was arrested on a warrant domestic battery in the presence of a child, a Level 6 Felony. Dillman is also being charged with resisting law enforcement, a Class A Misdemeanor.