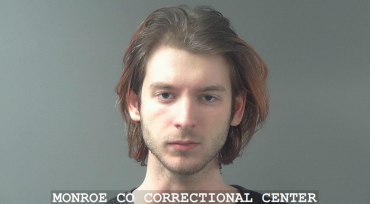 (BLOOMINGTON) – A Bloomington man was arrested after he raped a woman who had agreed to take nude pictures for $10,000.

According to a Bloomington Police report, on February 2nd, a woman reported she had been raped by 18-year-old Derrick Brown, of Bloomington.

The woman told police she met Brown on a dating app and the two met and smoked marijuana on several occasions.

According to court records, the woman says during the early morning hours of January 29th Brown offered her $10,000 if she would come to his home and let him photograph her nude.

The two made plans to get together and smoke marijuana. When the woman arrived at Brown’s home in the 500 block of North Smith Road, they went to Brown’s bedroom, smoked some THC cartridges and became intoxicated. Brown then took nude photos of the woman with her consent.

Documents state that she told police that Brown then asked her to have sex and she declined. Brown then escorted her to his bed by lightly touching her arm. She told police that she laid down and went into a “vegetative-like state of mind.” Brown had sexual intercourse with her, and when it was over, she took the time to collect herself before driving home, according to court documents.

The woman told police that she was fearful at the time of the incident because Brown is known to have firearms. During a consensual search of his room, police say they did find a gun in plain view.

Bloomington police state that when they interviewed Brown, his account of the incident changed several times. Brown later admitted to lying to police because he was “scared.”

Brown was arrested and charged with rape, a level 3 felony.