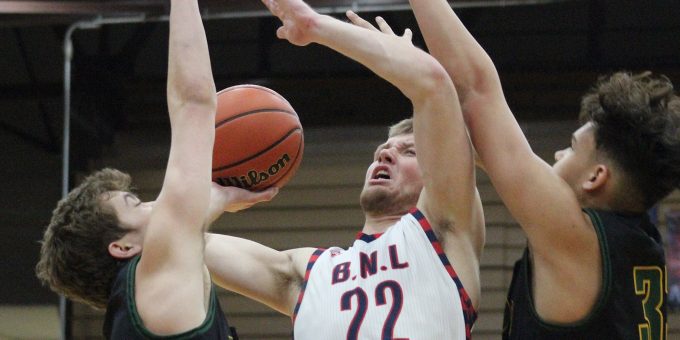 BEDFORD – Amazing. The Rodney Dangerfield of Hoosier Hills Conference basketball – nobody gave Bedford North Lawrence preseason respect, nobody predicted this remarkable run – is laughing all the way to the top of the league.

Grin and believe it. The rest of the conference might be staring with mouths agape, stunned into silence, as BNL continues to defy the experts with its grinding, gritty style, with its patience and toughness, and with every upset victory.

This victim? Floyd Central, the two-time defending HHC champion. The Highlanders had the Stars staggered, down 8 points to start the fourth quarter, out of their comfort zone when forced to pick up the pace or pick up the pieces of their shattered dream.

What happened? Rally time. BNL went into chase mode and Floyd disintegrated into dysfunction mode with out-of-character turnovers. Brayton Bailey and Colten Leach sparked the comeback, and the Stars added another improbable triumph to their growing list.

BNL battled back from that 40-32 deficit with a fist-clenched charge, shocking the Highlanders 49-43 on Thursday night. Bailey scored 21 points as BNL (11-8 with four straight wins) rushed to 5-1 in the conference and sole possession of the lead.

The Stars have won nothing yet. BNL still has a huge road game at New Albany later this month, and Jeffersonville still has only one league loss as it looks ahead to dates with Jennings County and Madison. But for right now, BNL is in prime position.

“Who would have thought that?” BNL coach Jeff Hein said. “We’re sitting in pretty good shape. I’m not saying we’re going to, because we have a pretty tough one down at New Albany. But we’ve put ourselves in great shape. It’s a great feeling to be where we are, but it’s not over yet.”

Floyd (12-5, 4-2 in the HHC) might have thought it was over. The Highlanders had BNL on the chopping block, ready to deliver the fatal blow. But Floyd was guilty of 8 fourth-quarter turnovers, shifting momentum.

Leach started the turnaround, converting a 3-point play after a steal. He drove the lane for a bucket, and Bailey dashed the baseline for a beautiful bounce pass dish to Jackson Miracle for another 3-point trip. BNL was within 41-40 with 4:52 left, and not finished.

Bailey roared through the paint for the third 3-point play of the comeback. He broke Floyd’s press for another layup. After Jake Heidbreder got Floyd’s only field goal of the final period, Kooper Staley and Bailey made huge one-and-one free throws in the final minute. What a punchline. BNL is no joke. Not at all.

“Toward the end, I was just thinking I needed to attack, get a foul or dish to someone that’s open,” Bailey said. “I try to do that all the time, but it really came in the fourth quarter. That’s when I had to kick it in.”

The Highlander kicked it away as BNL picked up its pressure and discovered Floyd wasn’t too thrilled about that.

“Oh yeah, we had an eight-point lead, right were we want to be against a team that’s a methodical offensive team,” Floyd coach Todd Sturgeon said. “And we turned the ball over. And we’ve not been that team. This team has turned it over the fewest of any team I’ve ever coached.”

Few turnovers? BNL had only three. Repeat that. Three turnovers. The Highlanders had only four offensive rebounds, although strong man Grant Gohmann was a force inside with 15 points and 9 rebounds. But he couldn’t get it when Floyd kept fumbling the ball away like it was hot and greased.

“We’ve struggled with extending our defense in a lot of games, but tonight it worked really well,” Hein said. “We were able to get after them, speed the game up. That’s not the way we normally play, but it worked.”

This upset was not built on blazing shooting. BNL made only three treys (all by Staley, who totaled 14 points). The foundation was defense and ball control. Not always pretty, certainly not sexy. But it wins.

BNL opened in front as Ben Cosner scored twice for an 8-2 advantage. Floyd bounced back as Gohmann buried a 3-pointer and muscled inside for a 3-point play, setting the tone for a back-and-forth skirmish the next eight minutes. Bailey had three buckets in the second period, but Floyd ended the half with Caleb Washington’s 3-point play for a 22-22 deadlock.

Gohmann powered Floyd to some separation to start the second half, scoring from point-blank range. When Cole Harritt capped the third quarter with a banked 3 at the buzzer, the Highlanders were in control with their biggest lead.

But not for long. Bailey believed, even if few others did.

“Even in the summer, it showed, if we played how we’re capable, we can play with anybody,” he said. “It’s a matter of if we do it. The last couple of weeks, we’ve been grinding, and it’s been paying off.”

BNL had several heroes. Leach was superb with his pressure and tenacity, causing a lot of the Floyd ballhandling angst.

“He does so many things on the floor,” Hein said. “He‘s so athletic. He gets the ball where it needs to go. He’s getting better all the time, and he made some huge plays in the fourth quarter. We were able to scrape back with our defense. We found a way to win.”

Heidbreder added 15 points for Floyd. Sturgeon tipped his coaching cap to Bailey’s leadership and playmaking during the late moments.

“Heck, I think we did a pretty fair job on him,” Sturgeon said. “He‘s just good. You’re in a bad spot if he gets that thing in there deep. He creates a lot of things a lot of people don’t even realize he creates.”

BNL, oozing confidence from every pore, will host Evansville Memorial on Saturday afternoon.