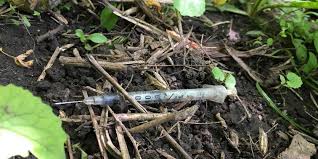 For the year-long pilot program, the health department will provide sharps containers and disposable inserts, which will be installed and maintained by the parks department.  Parks staff trained in the proper collection and handling of used syringes will collect inserts from the sharps containers when the inserts are full, and deliver the inserts to the nonprofit Indiana Recovery Alliance (IRA) for safe disposal.

The program helps address the 66% increase in the number of used syringes collected in city parks by maintenance staff in 2019 over the previous year.

“If the containers are used at all, we will consider the program a success,” said Bloomington Parks and Recreation Department Health and Wellness Coordinator Jess Klein.  “This initiative reduces the risk of harm for residents, parks staff, and the Bloomington Police Department.”

Providing containers for safe disposal of used needles protect first responders and the public from accidental needle stick injuries.  According to the Centers for Disease Control and Prevention, nearly 30 years of research has shown that syringe services programs, including access to sterile syringes, injection equipment and facilities for used needle disposal, do not increase illegal drug use or crime, and play an important role in reducing the transmission of viral hepatitis, HIV, and other infections.

“The Monroe County Health Department is pleased to partner with Bloomington Parks and Recreation on this pilot program to provide sharps containers for three city parks,” said Penny Caudill, Administrator of the Monroe County Health Department.  “Increasing safe disposal options is one more way we can support our community. This partnership and pilot program fits our vision of leading and partnering to create a healthier and safer community.”

The partnership agreement calls for a mid-year evaluation of the number of used syringes found disposed of on the ground in parks, and also the number of inserts used in the sharps containers. The program will be re-evaluated in the fall, and again at the end of 2020, at which point it will conclude or be proposed for renewal in 2021.