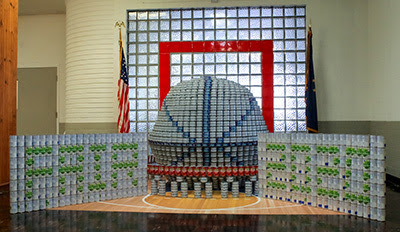 (UNDATED) – The State of Indiana’s Canstruction Competition brought out the best in employees as they collected canned goods and additional items in order to help restock local food pantries around the state.

Using those same cans and, in some cases, craft materials and other items to make each project as unique as its creators, employees from across the state took the food drive – and the building competition – to the next level!

See all of the 2020 Canstruction Competition entries here.

Each Canstruction stood out for one reason or another, but in the end, it was a creation by the Indiana State Fair Commission that was named Best Structure.

The Canstruction team put together an image of a basketball sailing through a hoop in honor of the Indiana Farmers Coliseum hosting the Horizon Basketball League Championships in March.

That astonishing total led to the State Fair Commission garnering the award for Most Cans as well. The final total collected by the 49 participating teams was 23,620.

The Office of Gov. Eric Holcomb, Indiana Department of Child Services Director Terry Stigdon, and Indiana State Personnel Department Director Britni Saunders served as the panel of judges who selected the creation as the winner among a crowded field of entries.

Employees referenced pop culture characters and properties like Star Wars, Super Mario, and SpongeBob, and in other cases paid homage to subjects as wide-ranging as the Roman Colosseum, the American flag, state of Indiana agency logos, important local landmarks, and so much more.

The creative array of Canstructures proved once again that state employees are at their best when they work together. Through the 2020 Canstruction Competition, food pantries in just about every corner of the state of Indiana will receive a welcome boost to their available non-perishable goods stock.

After judging was completed, the structures were disassembled and the cans were distributed to each participant’s chosen food pantry. That’s another great example of how State of Indiana employees give back and continually make a difference in their communities.

Thanks to all who participated and helped local nonprofits restock their shelves to continue helping Hoosiers in need.