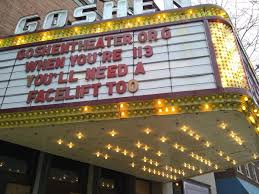 (GOSHEN) — Twinkling light bulbs that give a northern Indiana theater’s marquee a dramatic appearance can continue blinking thanks to a zoning board’s nod to the building’s historic nature.

The Goshen Theater’s twinkling lights wouldn’t normally be allowed under Goshen’s zoning rules, but the city’s Board of Zoning Appeals voted Tuesday to grant the theater a variance for its marquee, citing the 1907 theater’s history.

The variance allows for the display of chasing lights on the marquee’s top and bottom, in addition to flashing bulbs at its corners, The Elkhart Truth reported.

Theater board Vice Chair Julia Gautsche said the marquee, which was added to the theater 71 years ago, had always twinkled but that had become less apparent as many bulbs failed over the decades.

The flashing lights came to the attention of Goshen’s planning department last year after theater technical director Jerry Peters began replacing broken bulbs in the 857-bulb sign, which is illuminated from dusk to about midnight.

“There’s not a setting on the marquee. It’s either on or off,” Burgess explained after Tuesday’s meeting.

The theater opened in 1905 as the Jefferson Theater, but burned down in 1906. It was rebuilt and reopened in 1907 and was renamed the Goshen Theater in 1948, after which the marquee was installed.