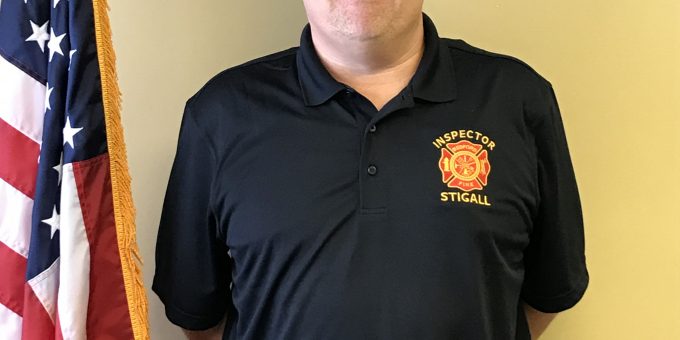 (BEDFORD) – Jason Stigall is ready to take on his new role as Fire Inspector for the Bedford Fire Department.

It was almost 12 years ago when Jason started at the Bedford Fire Department as a firefighter battling fires such as George’s Gateway fire back in 2011 and the Central Church of Christ fire in 2009.

Stigall is a 1996 graduate of Bedford North Lawrence High School and started at the Bedford Fire Department on July 28, 2007. Stigall’s father served as Bedford Fire Chief before retiring in 2007.

“I feel like this new job is a great opportunity, and I am excited to serve the City of Bedford,” Stigall stated.

Stigall will replace Bedford Fire Chief Dewayne Turpen who served as the fire inspector for the last 12 years.

The fire inspector also educates business owners and the public on fire safety and prevention. Stigall will be working with the Fire Prevention educator John Hughes, who is also the Assistant Fire Chief. Hughes teaches fire safety at local schools.

On average, the Bedford Fire Department conducts at least ten inspections a week. The goal is to inspect each business, school, hospital, and nursing home at least once annually.

“We also inspect assemblies such as churches, auditoriums, and movie theaters were the public gathers making sure these places are in compliance with fire codes,” Fire Chief Dewayne Turpen said.

“It is important that the fire inspector has some fire suppression knowledge like Jason,” Fire Chief Dewayne Turpen added. “He must be familiar with building code, fire code, and mechanical code.”

The Bedford Fire Department works with Bedford Plan Commissioners Dan Kirk, Mel Rile, and Brandon Woodward in all new construction in Bedford. This makes sure their fire suppression systems are working properly, and the buildings are being constructed to code, and pre-planning for that building is complete.

Bedford Fire Department also responds to any complaint that the public calls in, such as fire exits blocked, locked, or unsafe housekeeping by a business or public building.

The fire department will make sure that some things are addressed immediately should a life/safety issue exist and will not leave the premises until it is addressed.

At other times the Bedford Fire Department will allow ample time to address other code violations if it is expensive for the property owner to address.

Stigall will start classes in Indianapolis with the Indiana State Fire Marshal’s Office. Classes are held once a month.

Inspectors learn all the applicable codes and become familiar with how to enforce those codes. Some codes will apply to those grandfathered in prior to new codes being drafted.

“I started on January 27th in the new position and I am getting familiar with the new job. I have received all kinds of support from the other firefighters in this new position and want to do my best,” Stigall stated.

The objective of a fire inspector makes sure every business is in code compliance and most of all are safe for the public.