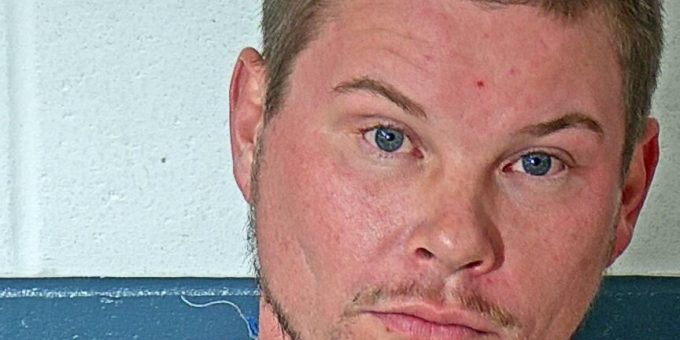 (MITCHELL) – A Bedford man was arrested early Saturday morning on drug charges after causing a disturbance in the 930 block of Walker Addition.

Mitchell Police officers were alerted at 10:12 p.m. Friday night that a male was in the area of Walker Addition and Doc Hamilton Boulevard yelling for help. When police arrived they could not find anyone.

A short time later the caller in the 930 block of Walker Addition phoned back and wanted to speak to an officer.

When Major Ryan Duckett arrived he heard what sounded like an injured animal crying in the area of Doc Hamilton Boulevard.

Major Duckett climbed the steep embankment that leads up to a hill near the bridge on Doc Hamilton Boulevard and located 35-year-old Joseph Crecelius laying on the rock and “randomly making a squawking type noise.”

Major Duckett attempted to speak to Crecelius but was unsuccessful.

“I attempted to get Joseph to speak with me and was unsuccessful. I did not observe any apparent injuries to Joseph other than an abrasion to a finger on his right hand that appeared to be caused by excessive fingernail chewing,” Major Duckett added.

He then requested an ambulance. While waiting for paramedics officers continued to attempt communication with Crecelius who then became verbally combative.

Officers say Creceluis had been drinking and was intoxicated.

When paramedics arrived they got Creceluis to his feet, but he refused medical attention.

Creceluis was arrested for public intoxication. During a search of his person, officers located a plastic bag that contained 0.20 grams of meth and a black plastic box that contained marijuana and a smoking pipe.

Crecelius was transported to IU Health Hospital for a blood-draw and medical and mental evaluation. Police say Crecelius was making suicidal statements.

Officials say that Crecelius had a blood-alcohol content of 0.149 percent.