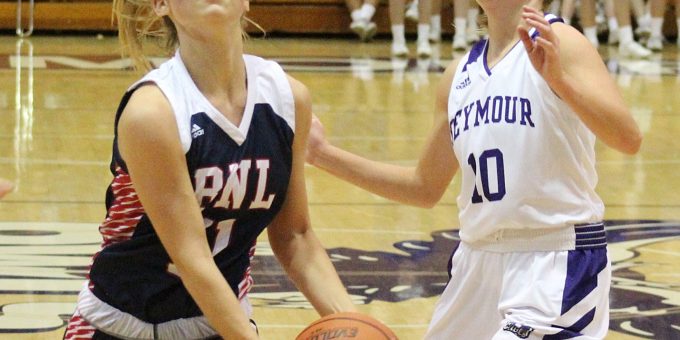 BEDFORD – Eight is great. Nine would be divine as Bedford North Lawrence looks to extend an impressive sectional championship streak.

The Stars (16-5) will begin defense of their crown on Tuesday night, facing a rematch with Seymour (8-16) in the opening game of the Class 4A sectional at Jennings County. BNL has won eight consecutive championships, a 24-game winning streak that adds pressure to the possible one-and-done sudden demise in the postseason.

Everybody in the all-Hoosier Hills Conference field would love to take out the Stars, who shared this league title with Jeffersonville, and end this brutal reign. New Albany (7-14) will await the BNL-Seymour winner in the first semifinal on Friday. In the other half of the bracket, Jeffersonville (13-10) will face Floyd Central (5-17) in Tuesday’s second game, with that victor to meet Jennings County (9-14) in the second semifinal.

The championship, which has become BNL’s annual coronation, is set for Saturday night.

BNL, which lost to Jeffersonville in the regular season, is the definite favorite after the Red Devils were decimated by injuries to top players Kelsie James and All-Star candidate Nan Garcia. The Stars expect the best from everyone, and they can sense the intensity.

“Oh yeah, for sure,” senior guard Gracie Crulo-Rood said. “We don’t want to be the ones to lose the streak. We’re hoping for the best.”

Seymour had its best shot at BNL during the regular-season cash on Dec.12 in the Owls Nest. The Owls hit 11 3-pointers and owned a 42-39 lead after three quarters. But the Stars opened the fourth quarter with 12 straight points and pulled away to a 59-49 victory.

Points of emphasis for the rematch? For the Owls it will be their 27 turnovers and stopping BNL junior Chloe McKnight, who scored 25 points. Seymour would also love to keep BNL off the foul line as the Stars went 25-for-32 there to avoid the upset.

For BNL, it will be defending the 3-point line (Seymour forward Grace Schrader buried 4 en route to 14 points and Aidan Hiester was 3-for-3 from distance) and converting layups. The Stars shot a dismal 32 percent that night.

BNL coach Jeff Allen will worry about the defense first.

“We’re better defensively now – I’d like to think we are – than we were then,” Allen said. “They made shots. On the road, when a team makes shots, it can be a little difficult. They played us well the first time.

“We’ll try to be a little more aggressive defensively. We forced them into several turnovers and we’ll try to accomplish that. We’ll try to do a better job of guarding people at the 3-point line, getting a hand up on close-outs. That’s been a focus for us.”

Grace Meyer leads the Owls in scoring (17.6) and rebounding (7.4). She had 13 points and 9 boards in the first meeting with the Stars. The Owls shot 53 percent that night.

“They were on fire,” Crulo-Rood said. “We’ll have to get up on them to make sure they don’t do that again.”

“We’ve got weapons and we can utilize what we need to,” Allen said. “Hopefully we can shoot the ball well. But it’s a conference team, in the sectional, and we’re expecting a battle. We know none of those games will be easy.”

Nothing should be easy when a title is at stake. The Stars can think back to the 2018 tournament, when all three games were decided by single digits and the final two were one-shot finishes (including the double-overtime classic with the Devils). So while the pressure as the favorite (BNL has a 64-percent chance to win it, according to the John Harrell website) certainly exists, Allen believes his team is equipped for it.

“I think it’s confidence in our preparation and how we play,” he said. “That’s what we focus on. We’re prepared, we’ll play hard, and we’ll try to execute better than our opponent. You know your team is ready to play, that’s how you combat that.”

“I’m excited,” Webb said. “We’re all really focused because it’s one-and-done. It’s really nerve-wracking right now because we want to keep the streak. We don’t want to be the ones that lose it.”

The sectional champion will advance to the two-game regional at Columbus North on Feb. 15.

Last meeting: On Dec. 12, the Stars conquered the Owls 59-49 at Seymour. Chloe McKnight scored 25 points and Karsyn Norman added 13 for the Stars, while Grace Schrader had 14 for the Owls. Seymour hit 11 3-pointers but had 27 turnovers.

Game notes: The winner will face New Albany (7-13) in the semifinal. BNL has won five straight in the series. The Stars own a 24-game sectional winning streak. Rushville holds the state record for consecutive sectional titles at 18 (1980-1997).