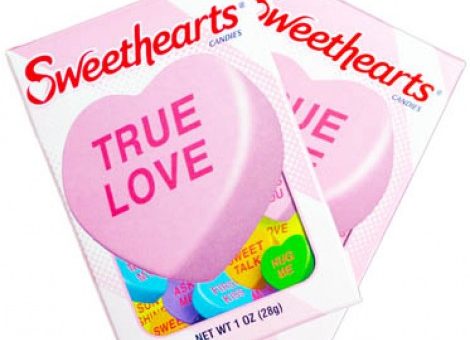 (UNDATED) – Sweethearts candies that send short affectionate messages of, “Be Mine,” “Be True” and “Kiss Me,” will not be on the sweet treats this year and will be in short supply.

This year, you may find most of them are missing some or all of their iconic messages of affection due to production problems.

According to candystore.com, 97% of the conversation hearts are without a complete phrase on them and 65% are blank.

The bulk candy store, which inspected 10 boxes of Sweethearts, found:

Sweethearts were missing from shelves in 2019 after the company that made the candy the New England Confectionery Co. went out of business in 2018.

The company was later bought by Ohio-based Spangler Candy Co. Spangler officials say they did not have enough time to produce a large number of Sweethearts before Valentine’s Day in 2019.

Spangler found the original recipe from 1902 and planned to return with classic flavors like wintergreen and banana.

Then, they had to ship all of the Sweethearts-making equipment from Boston to Ohio more than 60 truckloads. Then, the printers that type the messages malfunctioned. So did their replacements.

“The journey back included a few bumps in the road. The old printing equipment was not reliable so Spangler invested in a new printer, but it was accidentally damaged during production. The result was a few more ‘silent’ hearts than usual,” according to a post on Spangler’s website.

In the 1860s, Daniel Chase was the first to print sayings on candy hearts. Daniel was the brother of Oliver Chase, the founding father of the candy manufacturer NECCO. Daniel invented the machine that pressed a felt roller pad moistened with red vegetable coloring against a printing dye which would stamp the sayings on the hearts. The printed hearts were originally shared at parties and weddings.

CandyStore.com says the design flaw is drawing the attention of people who want to save the flawed candies as collector’s items.