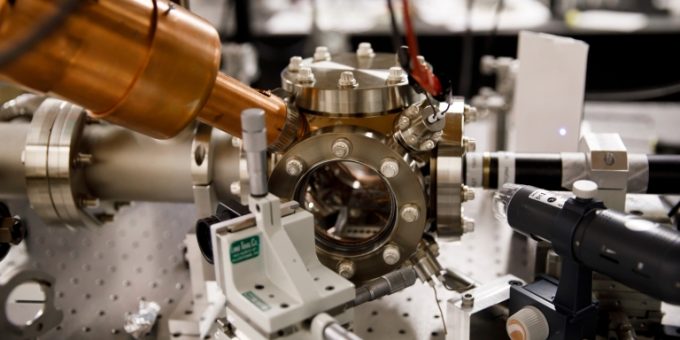 (BLOOMINGTON) – Indiana University has established a new research center to pursue the rapidly developing field of quantum science and engineering.

The new Quantum Science and Engineering Center will investigate possibilities created by the strange properties of quantum theory, particularly the phenomenon known as quantum entanglement. Within the past two decades or so, scientists have realized that entanglement can revolutionize technologies in fields such as cryptography, computing, and the creation of new materials and sensors. These recent developments hold such promise that some refer to them as the start of the “second quantum revolution.”

The new center reflects the important contributions IU is making to this second quantum revolution. The first revolution was the development of quantum mechanics and the 20th-century technologies it made possible, such as lasers and semiconductors.

The U.S. government has endorsed the vast potential of quantum science research with passage of the National Quantum Initiative Act to “accelerate quantum research and development for the economic and national security of the United States.”

“There is significant quantum-related research going at IU in physics, mathematics, chemistry and informatics,” said David Baxter, co-leader of the Quantum Science and Engineering Center, and professor of physics at IU Bloomington. “A number of these efforts are world-class, and the collaborations made possible by the new center will only increase their impact.”

Since receiving the funding in early 2019, the center’s researchers have received more than $3 million in additional funding from the Department of Energy and National Science Foundation. Much of the work funded is focused on quantum simulation, an area of research that sets IU apart in the quantum science field.

By definition, quantum problems are hugely complex and difficult, leading scientists to develop a way to simulate quantum problems to enable more controlled and accurate studies. A quantum simulator uses trapped ions (ions are atoms or molecules with a particular charge). Until now, ions have had to be trapped in a one-dimensional chain.

Researchers affiliated with IU’s new Quantum Science and Engineering Center, including Assistant Professor of Physics Phil Richerme, have succeeded in trapping ions in a two-dimensional plane. Think of one dimension as a line, and two dimensions as a sheet of paper. The added dimension can give scientists exponentially greater power to understand quantum problems and would provide a brand-new experimental system in quantum science.

“A 2D ion trap quantum simulator would be the first of its kind and would offer unprecedented opportunities to address open questions in quantum physics, for which we currently have no reliable approaches,” says IU Bloomington Professor of Physics Gerardo Ortiz, who co-leads the new center with David Baxter.

The Quantum Science and Engineering Center will also spur educational opportunities for IU students, including new undergraduate courses and potentially one of the country’s first programs in quantum engineering. The new field “will be vital to full realization of the second quantum revolution,” Baxter said.

“Quantum science and engineering is the future of communications, computation and cryptography,” said Jeff Zaleski, IU Bloomington’s interim vice provost for research. “Indiana University’s intellectual expertise in quantum science truly puts the university at the forefront of this developing field, and we are eager to drive the leading edge of research in this area.”

Indiana University’s world-class researchers have driven innovation and creative initiatives that matter for 200 years. From curing testicular cancer to collaborating with NASA to search for life on Mars, IU has earned its reputation as a world-class research institution. Supported by $680 million in FY2019 from many partners, IU researchers are building collaborations and uncovering new solutions that improve lives in Indiana and around the globe.