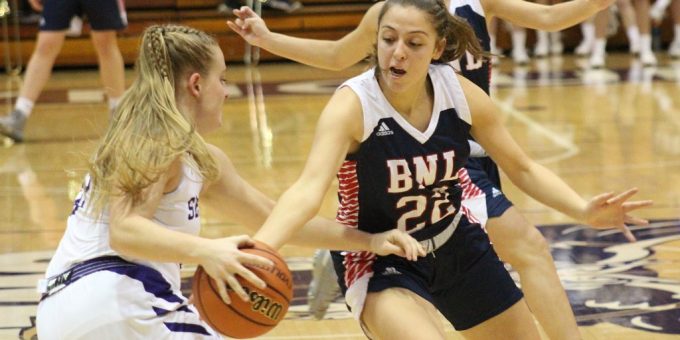 BEDFORD – Want to guess the word of the week at Bedford North Lawrence? Starts with a D. . .

BNL’s success has always started with D, which stands for defense, and defensive stands have been lacking in recent performances. The Stars got away with it at North Harrison, but fell down without legs to stand on at Salem on Tuesday night.

After giving up 60-plus points in back-to-back games for the first time in 11 years, after the Class 3A No.2 Lions ended BNL‘s 8-game winning streak, the Stars will be in bad moods when Terre Haute North (10-12) steps through the doors of BNL Fieldhouse on Saturday afternoon.

BNL will celebrate seniors Gracie Crulo-Rood, Madison Webb and Peyton Sweet during pre-game ceremonies, and that’s always an emotional event for the program. After the tears and hugs, the Stars want to become defensive bears and plug the holes once again.

“The concern for us is our defensive stops,” BNL coach Jeff Allen said. “That’s something we have to correct, something we’ve always been good at. For some reason, the last couple of games, we’ve struggled.

“So we’re going to put a little focus on that going to to the postseason. We’ll sit down and really work on our defense in the half court, make sure we can stop people when we need to.”

The loss at Salem was a stinger. BNL (15-5) got outscored 14-2 during a critical juncture of the fourth quarter, losing some momentum for the postseason next week. That puts a double emphasis on the regular-season finale.

“I think we’ve bounced back,” Allen said. “That was a downer for us. We don’t feel like we put our best foot forward in that game. Obviously we wanted to win that game.

“There were some smiles on the floor in practice, some good effort, so I feel like we’ve bounced back from that.”

The Patriots won’t be a pushover. They are coming off back-to-back wins over Cloverdale (80-48) and Bloomington North (57-41 on Thursday night), and they’re looking for some revenge following last year’s 66-25 BNL beatdown.

“They play a tough schedule and they’re probably better than their record,” Allen said. “They have some athletes, some length.

“At this point of the season, we just want to play well. They’re our next opponent, so they will get our best shot, that’s for sure.”

Last meeting: Last year at Terre Haute, the Stars sailed to a 32-3 lead and cruised to a 66-25 victory. Jorie Allen had 25 points and Chloe McKnight added 15 for BNL. Zoe Stewart totaled 7 for the Patriots.

Game notes: BNL has given up 60-plus points in back-to-back games for the first time since the 2008-09 season, when the Stars surrendered 66 (Seymour) and 60 (Jeffersonville) to end the year. They also allowed 60 (Columbus East) and 83 (Floyd Central) in consecutive outings earlier that same season.