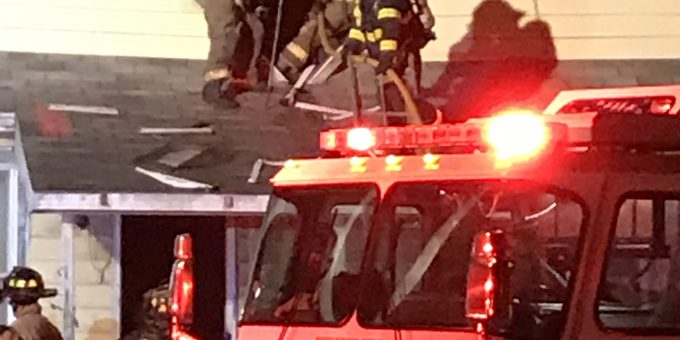 (MITCHELL) – An elderly woman and her disabled son were displaced by a fire on Tuesday night.

Mitchell and Marion Township Fire Departments were dispatched around 10:50 p.m. to 103 East Warren Street in Mitchell to a house fire.

“I heard a loud pop, and then seen the smoke,” said Linna Reynolds. “My son Richard kept telling me he smelled smoke and then the fire broke out.”

Linna Reynolds, 77, and her son Richard, 45, have lived in the home since he was born. Reynolds’s husband passed away on March 15, 1996. The Reynolds have faced many challenges lately. The family has no transportation and has been walking to get groceries and do other businesses in Mitchell.

While firefighters were battling the blaze, Linna was worried about having to move out of the home. She says that they have no insurance on the home.

“I really do not know what I am going to do. I will need a lot of help,” Reynolds said.

Mitchell Police and Fire Department contacted the American Red Cross to try and get them a place to stay for the evening. Firefighters told them there was too much damage in the home to stay the night, and power was disconnected so firefighters could battle the blaze.

The fire is believed to be an electrical malfunction in the home. Linna told firefighters they were having issues with fuses blowing.

Firefighters were on the scene for several hours to make sure the blaze was completely extinguished. Firefighters cut a hole in the roof to access the fire in the attic.

Tuesday evening’s fire was the second for Marion Twp. Fire Department. They had just returned back to their fire station when this second fire was dispatched.