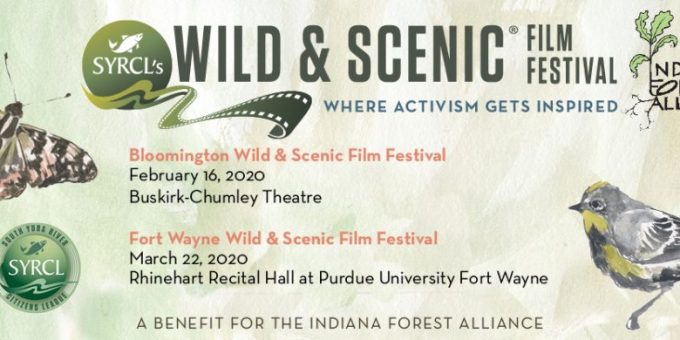 (BLOOMINGTON) – The Indiana Forest Alliance (IFA) is once again hosting its popular Wild & Scenic Film Festival, this time in two locations, Bloomington on February 16 and in Fort Wayne on March 22.

This year’s lineup, will feature the same films at both locations, includes 10 films, two of which were produced in Indiana.

Teardrop Pictures, a film company based in Indianapolis, produced Snag in the Plan. This film documents the story of IFA’s search for the once common Northern long-eared bat. IFA’s short animated film Our Imperiled Forests examines the threats to Indiana’s state forests and how citizens can work to combat them.

“The main purpose of the film festival is to promote advocacy and education on environmental concerns that affect us all,” said Elizabeth Tollefson, IFA’s director of development. “The festival is also a wonderful opportunity for Hoosiers who love Indiana forests to come together for an entertaining evening and leave feeling inspired. You are guaranteed to learn something new!”

The full lineup features films from diverse storytellers and settings, including the conservation efforts as told by a Rwandan park ranger. Another film follows the story of a group of Indigenous women fighting against fossil fuel pollution in Louisiana. As has been the custom, this year’s festivals will feature a raffle and local musicians, The Hammer & The Hatchet and Chris Wolf.

The film festival, which benefits the IFA, is an exciting opportunity to “engage with like-minded people who care about Indiana nature,” said Monroe County resident David Seastrom, a member of the Wild & Scenic Film Festival steering committee.

One event. Two dates and locations in Indiana.

This year’s sponsors include:

The Wild & Scenic Film Festival, presented by the IFA, is organized by the South Yuba River.

The Indiana Forest Alliance is a non-profit, statewide organization founded in 1996, dedicated to preserving and restoring Indiana’s native hardwood forest ecosystem for the enjoyment of all.