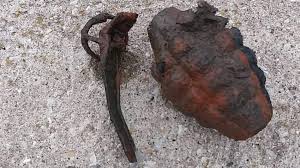 (GARY) — A man fishing from a northwestern Indiana bridge reeled in an apparent live grenade, prompting a road closure until the device was removed by a bomb squad.

A Gary police officer who was called to the Little Calumet River bridge on Monday evening to investigate learned that a man who had been fishing from the bridge pulled up what appeared to be a live grenade, The (Northwest Indiana) Times reported.

The road that traverses the bridge was temporarily closed off and the Porter County Bomb Squad was called for assistance.

Authorities were investigating how and when the grenade ended up in the river in the city located about 30 miles (50 kilometers) southeast of Chicago.