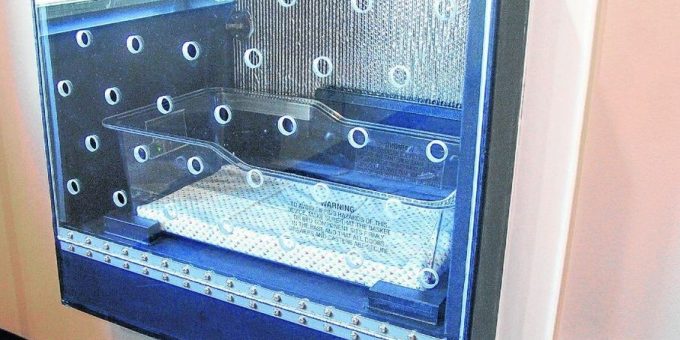 (SEYMOUR) – The baby girl that was placed in the Safe Haven Baby Box at the Seymour Fire Station on Thursday afternoon was only about an hour old, according to health officials.

The infant was placed in the custody of Indiana Child Protective Services, which will find a set of adoptive parents for her within the next 45 days, said Monica Kelsey, founder and chief executive officer of Safe Haven Baby Boxes. Parents who surrender their babies have 30 days to come back if they change their minds.

The baby was placed in the Safe Haven Baby Box at the station at 605 Meadowbrook Drive on the city’s east side at 1:30 p.m. The box is electronically monitored and once a baby is placed in the box a series of alarms sound alerting firefighters a baby was in the box. The baby was retrieved within 60 seconds.

“This baby is healthy, perfect and doing very well and appeared to be around one hour old,” said Kelsey during a news conference.

Officials praised this mother for doing the right thing and keeping her baby safe.

The box was placed at the fire station thanks to the hard work of Hunter Wart, a 2019 Columbus North High School graduate, who, as a senior project, raised funds to install the box.

Lucas said the firefighters have had pediatric training, and then Kelsey came down and gave them training information before the box was operational. They also have weekly alarm tests to make sure everything is running smoothly.

The baby box in Seymour was made possible by 2019 Columbus North High School graduate Hunter Wart, who raised $10,000 for his senior project to install one at an Indiana fire station last year.

“Many of you may remember that this baby box came about from the hard work of one senior, Hunter Wart,” Kelsey said when introducing him. “He collected cans and mowed grass to pay for this baby box.”

Hunter said he was glad his hard work had paid off.

“I’m glad that the mother brought her baby safely to the baby box, and I want my hard work to pay off for a long time,” Hunter said. “This is the first baby to have been surrendered to this box, and she will be now be known as Baby Mia.”

Hunter said Kelsey is normally the one who names the surrendered babies, but since this is the box he worked for and donated, he was given the chance to name her.

Mayor Matt Nicholson presented Hunter with a lapel pin from the city to thank him for his service.

“Here we are 224 days later and we’ve had our first baby saved by the box, and I think that’s an awesome feat,” Nicholson said. “I’m glad the city of Seymour and the council chose to get the box when they did.”