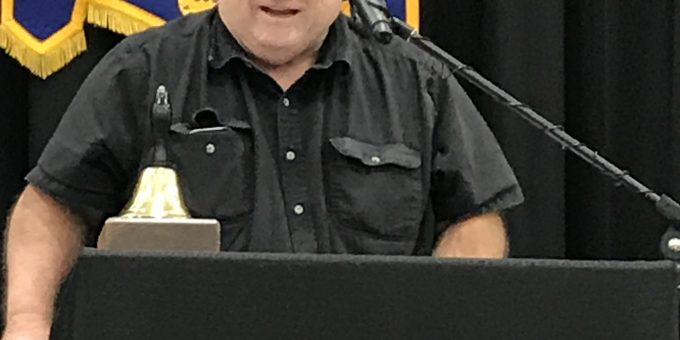 (BEDFORD) – The “only way to have friends, be one” was quoted twice during the evening of the John Williams Scholarship Toast. Ralph Waldo Emerson’s quote was used to describe Bob Bridge who formed friendships all across the community.

The Toast is a fundraiser for the Bedford Rotary Club. The First Baptist Church was packed to Toast a man who made huge contributions to making Bedford a better place.

Bob Bridge arrived in Bedford, Indiana in 1979 after graduating from Indiana University. He then landed a job at The Times-Mail as sports editor.

After that first year, Bob fell in love with Bedford while covering local sports and highlighting the success of the 1979 Bedford North Lawrence football team. With all the places he could have gone, or the things Bob Bridge could have done, Bob spent the next 40 years in Bedford.

During his career, he covered some of the best basketball coaches in the area including Dan Bush, Pete Prichett, J.R. Holmes, J.R. Butcher, and of course Indiana University’s all-time favorite coach Bob Knight.

Bob won many awards for his writing. This includes ending up in the Indiana Basketball Hall of Fame with those renowned coaches just mentioned above. Bob never boasted about any of those successes.

Sunday evening was filled with accolades, with many describing their encounters with Bob as a friend, confidant, and counselor.

Colonel Colby Short sent well wishes by video, describing how his childhood, as well as a career in the military, was aided by Bob Bridge.

Bob’s career included forty years of writing for the Times Mail. His long list of accomplishments includes writing for Inside Indiana and he was the creator of 1340 AM WBIW’s Talk of Town.

Bob’s concern for the community landed him on many boards and he volunteered his time for many causes. These community organizations included Lawrence County Community Foundation, the Boy & Girls Club of Lawrence County, the Salvation Army, Lawrence County Ambassadors, White River Humane Society, and Becky’s Place.

Clayton Anderson made it to Bedford to visit Bob on Sunday, and Bob Bridge discussed what this community means to him personally by describing a song that Anderson wrote which is titled “Right, Where I Belong”

“After a year in Bedford, I knew this is right where I belonged. I am proud of Bedford. My dad probably really was hurt and wanted me to go somewhere else, but this is the place I wanted to be,” said Bridge.

The late Jim Lehr, who died this week, stated, “cover, write and present every story with care as if that story was written about you.”

Bob Bridge wrote with that kind of care in telling news accounts, game losses, or deaths of long-time Bedford residents who contributed to the community.

Bob Bridge was a prolific writer. Many in the community would purchase copies of the Times Mail at times just to hear what Bob Bridge had to say about a topic.

Topics included lessons from Mayberry North Carolina, or just thoughts about his beloved mom Ruthie or dad Bill, or his dogs Emerson or Brooklyn. These writings endeared many throughout the community.

Athletes went to the sports section to see what Bob had to write about their games and accomplishments. Bob treated those kids as if they were professional athletes all the way down to the cheerleaders. Bob covered all athletics; not just basketball and football that garnered a lot of attention, but the smaller sports programs such as volleyball, tennis, and soccer.

Bob honored his colleagues at the Times-Mail who he worked alongside. He complimented them on their jobs as journalists which have become harder for newspapers in a world taken over by social media.

At the conclusion of the “Toast to Bob Bridge” was the Rotary Club Four-Way Test. Bob Bridge could have been a Rotarian.

Bedford is truly a better place because of Bob Bridge.