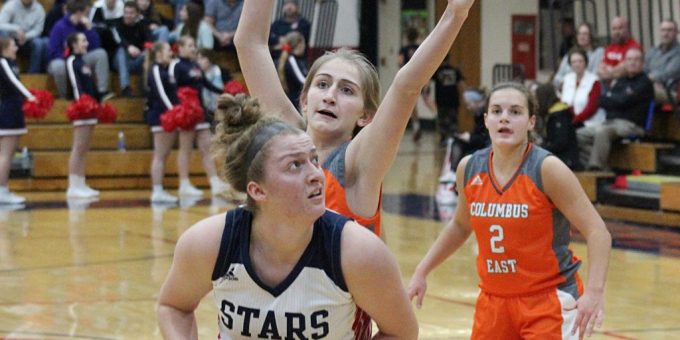 BEDFORD – What if. Playing that game is a losing proposition. There’s no way to win it, although nobody can blame Salem coach Jerry Hickey for wondering a little out loud.

What if Salem had not lost star guard Leah Miller to a left knee ACL injury during the soccer season? To Salem’s credit, the Lions didn’t mourn, didn’t pout, didn’t give up. They’ve just won.

Salem, ranked No.2 in Class 3A, will face No.14 Bedford North Lawrence on Tuesday night in a clash of Southern Indiana powers. Even without their floor leader, the Lions (17-3) have plenty of claws and teeth to take down the hottest team in the region.

With four players averaging close to 10 points or more per contest, Salem has firepower, and it has no fear of a Hoosier Hills Conference opponent. The Lions are already 6-0 against the rest of that league, so a win over the No.14 Stars (15-4) could – again, what if – in theory give Salem a piece of two league titles. Salem currently shares the top spot in the Mid-Southern.

“I like having this high-level game on the road against somebody that has the capability of beating us,” BNL coach Jeff Allen said. “We will have to be focused, play with great intensity and make shots. If we can shoot the ball well, hopefully we can make it difficult for them.”

Salem, coming off a Class 3A regional title last season, could have crumbled without Miller, who averaged 14.4 points last year. Instead, the reverse happened. The Lions solidified.

“Not only was she our best player, but she’s one of the top players to ever play at our school,” Hickey said. “There’s not a day goes by that we don’t think about what it would be like if we still had her. But we’ve had 20 games to play without her and the girls have responded well.”

The sum of the parts has equaled a greater collection than the void created. Karly Sweeney leads the Lions in scoring at 11.7, Natalie Noel adds 10.4, Abigail Ratts contributes 10.1, and Hope Tomlinson averages 9.7. There are no holes.

Salem’s only concern has been a go-to, we-have-to-score player in the clutch. That was a problem in the losses to Brownstown (54-50) and West Washington (also 54-50, when the Lions were a dismal 1-of-27 from long distance). The other setback came to Class 4A No.2 Crown Point (now 23-0) in the opening round of the Hall of Fame Classic in New Castle.

“That’s where Miller would have that calming influence,” Hickey said. “Nobody tried to press us, because we could throw her the ball and she would dribble through it. When we needed a bucket late in the game, we knew who we were going to. In the two losses to local teams, that’s what hurt us down the stretch. We didn’t have that great individual, one-on-one player.”

“The thing that strikes me is they play extremely hard,” Allen said. “That makes them dangerous from the beginning. They’re a very good offensive rebounding team, they get second and third opportunities and captialize, which is something we struggle with occasionally.

“They get points out of pressure, and they have a bunch of kids who don’t care who scores, they just want to win. So for us, being on the road, it’s about taking care of the basketball against the press and limiting the offensive rebounds. If we do that, we put ourselves in good position.”

“That night they looked like the best team in the state,” Hickey said. “It’s their athleticism at guard, their ability to shoot the ball. They have experience. We know it will be a tough game.”

BNL and Salem last played during the 2003-04 campaign. Last year’s game at BNL was postponed because of inclement weather, and the schools could not agree to a rescheduled date. That forced BNL to hastily add Indianapolis Riverside in order to celebrate Senior Day.

Game notes: Salem is 6-0 against HHC teams this season. The Lions went 24-4 and won a regional title last season. Last year’s game with BNL was postponed by weather and not rescheduled.