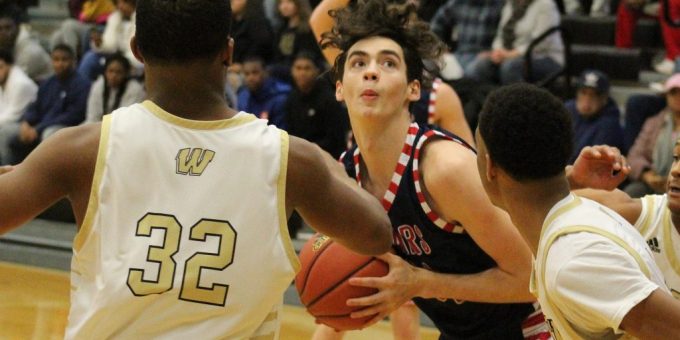 BEDFORD – Back at full strength, Edgewood is undefeated, a five-game streak that includes the last four on the road. That’s impressive.

The Mustangs (9-6) welcomed back senior star Trevor Taylor after he missed the first 10 games (suspension), and they’ve galloped at full speed since his return, stampeding toward a Saturday night clash with Bedford North Lawrence.

New head coach Matt Wadsworth, a veteran with his fourth program, had to transition his system with his best player on the sideline. Now he’s able to use all his weapons.

“He adds an extra dimension to our team,” Wadsworth said. “He’s a good outside shooter, and he has the ability to distribute the ball on the offensive end.

“We’ve trying to take advantage of perimeter shooting. With me being a new coach, we’ve tried to keep things simple as we’ve progressed through the first half of the season. Coach (J.B.) Neill (who left after three seasons) was one who liked to push the ball and take advantage of the outside shot. And we’ve maintained that.”

Taylor has averaged 16.0 points since his belated debut, combining with junior Coleman Sater (15.9 points, 8.1 rebounds) and senior Derek Farkas (10.8 points) to give the Mustangs multiple prongs of attack.

BNL got a first-hand look at Taylor’s ability last season as he scored 22 points during the clash at Edgewood. But the Mustangs couldn’t corral Brayton Bailey, who totaled 31 points as the Stars stormed to a 70-54 triumph.

“Bailey has been very good,” Wadsworth said. “He’s one you have to be sure to stop in transition, and do your best to keep him out of the paint.

“As the year has gone on, they’ve gotten more comfortable with Coach (Jeff) Hein’s style. (Trey) Mollet and (Kooper) Staley, on a given night, can knock down the outside shot, so you have to be prepared to guard them.”

Taylor has also made a defensive difference. The Mustangs have allowed only 50.2 points per game during the recent streak, compared to their season total of 57.7.

“He’s got them defending well, sharing the ball on the offensive end,” Hein said. “They’re playing well. They have some weapons. It won’t be easy. We have to find a way to grind it out.”

Last meeting: Last year at Edgewood, BNL rolled to a 70-54 victory. Brayton Bailey had 31 points and Jathan Ritter totaled 15 for the Stars, while Trevor Taylor had 22 for the Mustangs.