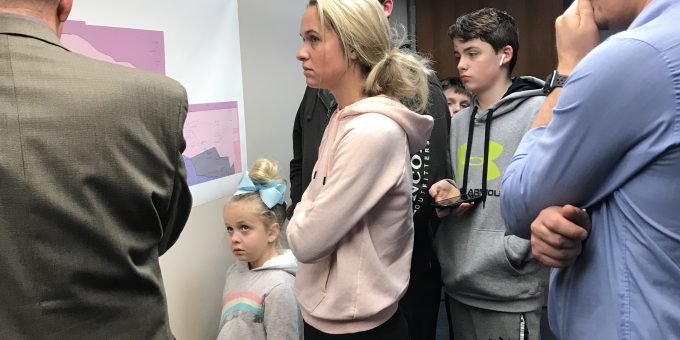 (BEDFORD) – Only a few families looked over the proposed district lines and bus routes during the public viewing on Thursday evening at the North Lawrence Community Schools administration building.

Only five to six families attended the public viewing.

“It is kind of disappointing to working families the times that people could come and comment on the proposals,” said North Lawrence Community Schools Parent Group representative Trisha Turner.

Families will have another opportunity to view the maps next week on Tuesday and Thursday from 4 p.m. until 6 p.m.

Corey and Kayla Ikerd brought their three children to look at the proposals and would like to have their child Charlie attend Oolitic Middle School.

The Ikerds reside on Maul Ridge Road and have already been in contact with North Lawrence Community School officials to have their child attend Oolitic schools.

“I have several of my friends that attend Oolitic Middle School and I would prefer to go there,” Charlie Ikerd said.

Nikki West’s children Andie and Bentley will be attending Eastern Greene. Nikki works at Crane and says it will be more convenient for their family if their children attend Eastern Greene.

“Andie, however, is a little more apprehensive about that move because of having to meet new friends and will be attending a completely new school,” Nikki West commented. Andie is an adopted foster child and will most likely have a harder time adjusting than other children, Nikki said.

According to Dr. Mungle, there have only been 12 online comments about the proposed bus routes and boundary lines. Parents can offer feedback by visiting this website.