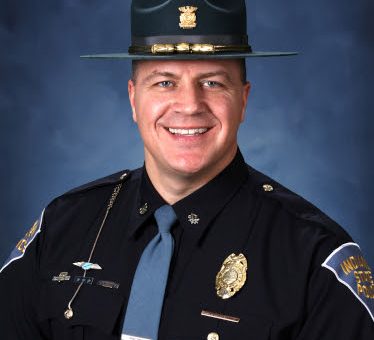 (BARTHOLOMEW CO.) – The Superintendent of the Indiana State Police, Douglas G. Carter, has announced the promotion of Captain Larry D. Jenkins to the rank of Major.

Major Jenkins will serve as the Assistant Chief of Staff Communications and Information Systems and will oversee the Regional Dispatch Centers, Indiana Criminal History Repository, Indiana Data, and Communication System, and the Indiana Vehicle Crash Records Program, as well as all, advise on all information technology needs for the department.

Jenkins, who is originally from Mitchell, Indiana, is a 1986 graduate of Mitchell High School and, in 1990, he earned his Bachelor Degree in Psychology from Franklin College.  On November 28, 1991, he graduated from the 49th Indiana State Police Recruit Academy, and was appointed as a Trooper and assigned to the Indiana State Police Post in Indianapolis, where he served for 8 years patrolling Marion and Johnson County.

In 1999, Jenkins transferred to the Indiana State Police Post in Seymour and patrolled Bartholomew County.  In 2004, he was promoted to the rank of Sergeant and served as a computer generalist with the Information Technology Section of the Criminal Justice Data Division.  In 2007 Jenkins was promoted to the rank of First Sergeant and given command the Information Technology Section.

In 2014, Jenkins was promoted to the rank of Captain, and he served as Commander of the Criminal Justice Data Division until this recent promotion.  During his career, Jenkins has served the Indiana State Police in the following disciplines:  Field Training Officer, Tactical Intervention Platoon, S.W.A.T, and as a Firearms Instructor.

Jenkins and his wife have three children and are residents of Bartholomew County.