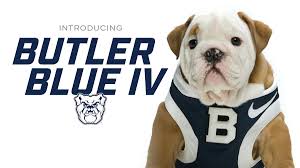 (INDIANAPOLIS) – The next Butler University live mascot will be introduced to the public during a Butler home basketball game on January 24.

Butler Blue IV, an American Kennel Club registered English Bulldog puppy, was born in October will be handled by Evan Krauss, who is succeeding Michael Kaltenmark.

Kaltenmark currently owns Butler Blue III “aka Trip.” Trip is set to retire at the end of the 2019-2020 academic year due to his old age and time on the job. Kaltenmark says Trip is still in great health, however, it’s time for him and Trip to take a step back.

Kaltenmark plans to stay involved in the live mascot program in a support role.