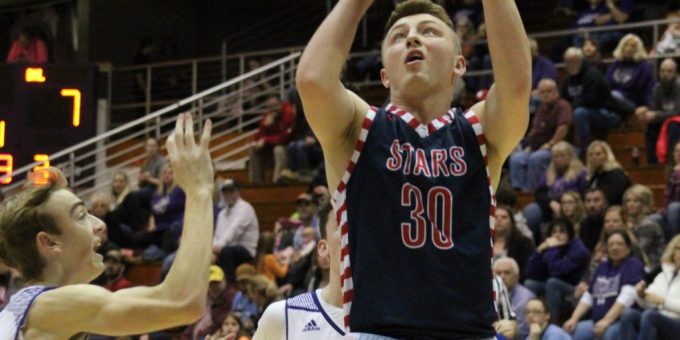 BEDFORD – When Kirk Manns, the athletic director at Seymour, started searching for a new boys basketball coach following the resignation of Tyler Phillips, he didn’t look very far. He chose the man in the mirror.

Manns, a former star at North Judson and Michigan State, shouldered double-duty responsibilities when the Seymour board of trustees announced the move in April. His task is restoring glory to a program that has floundered for the last 12 years.

Manns will lead the Owls (5-7) onto Damon Bailey Court on Friday night to face BNL (7-8). Seymour is searching for its first winning record since 2006-07, and the Owls have reached double-digits in wins only once in the last 9 seasons. Coming off a dismal 3-20 campaign, there’s obviously work to do.

But don’t be fooled by Seymour’s current mark. Three of the losses came in overtime, including a 43-42 setback at New Albany, and the Owls own a victory over Jennings County – the most recent BNL conqueror. Manns has the Owls flying once again. How high? They’re definitely off the ground.

“They’re playing well and you can see them gradually getting better on both ends,” BNL coach Jeff Hein said. “They‘re very solid defensively, they rebound well, and they’re physical.

“It’s a team that’s scary if you get behind, because they can make you extend your defense, and we’re not very good at that. We have to be able to get off to a good start and establish our defense from the very beginning. If they get going and we decide not to play defense, we could be chasing them all night long.”

Manns certainly has the basketball pedigree. He was an Indiana All-Star in 1986, and he led the state in scoring as a junior and senior. At Michigan State, he helped the Spartans (under legend Jud Heathcote) win the Big Ten title in 1990, earning Second Team All-Big Ten honors while averaging 15.3 points per game.

After a two-year professional career in Europe, Manns started coaching, first as an assistant with Western Michigan. From 2001-11, he was the head coach at Fredericktown (Oh.), winning three sectional and two conference championships.

His attack with these Owls is a deliberate, patient style. Seymour averages only 44.0 points per game, but the Owls are coming off a season-high 58 against Columbus East (after rumbling to a 22-2 lead against the Olympians).

BNL, conversely, just allowed a season-high 74 points in the loss at Jennings.

Seymour’s focus will be on Brayton Bailey, who powered the Stars to a 54-40 win last year at Seymour with 28 points and a career-high 14 rebounds. BNL trailed by 7 in the first half before Bailey took over.

The Stars are coming off a enigmatic weekend, escaping with a 56-55 victory over Mitchell (as Kooper Staley totaled 15 points an Ben Cosner added 14) before falling 74-68 to the Panthers. Hein wants to get back to the consistency displayed during the four-game winning streak in December.

“We had good spells, we had some bad spells,” Hein said. “We had big leads in both halves at Mitchell, let them crawl back in it. So we have to do a better job of putting the pedal to the metal when we get ahead, building that lead, continuing to attack.”

Bailey is now third on the school scoring list with 1,362 career points, with Kent Moutardier (1,469) his next target. That will be his final hurdle, as Damon’s state record of 3,134 remains safe.

Last meeting: Last year at Seymour, the Stars pulled away in the second half for a 54-40 victory. Brayton Bailey had 28 points and 14 rebounds for BNL, while Eric McCoy totaled 15 points for the Owls.