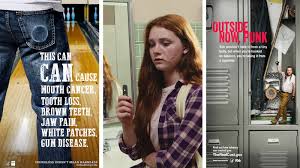 The videos feature teens’ true stories of the physical and emotional effects of e-cigarette addiction.

The four episodes of the series will be released throughout January 2020 on youth-focused channels and be amplified on “The Real Cost” campaign social media.

“The Real Cost” educates youth that using e-cigarettes, just like cigarettes, puts them at risk for addiction and other health consequences.

Most e-cigarettes contain the highly addictive chemical nicotine, and vaping delivers nicotine to the brain in as little as 10 seconds. A teen’s brain is still developing, making it more vulnerable to nicotine addiction, and nicotine exposure during the teen years can disrupt normal brain development.

In 2017, 2.1 million middle and high school students reported they currently use e-cigarettes, raising alarm about pervasive vaping in schools.  In 2018, with the upward trajectory of youth e-cigarette use continuing at an even more distressing rate,

“The Real Cost” developed a new series of messages for reaching the 10.7 million youth aged 12-17 who have ever used e-cigarettes or are open to trying them.